Maelbubha was born on the 3rd of January in the year of our Lord 642. On his father’s side he was eighth in descent from Niall of the Nine Hostages, sovereign of Ireland. On his mother’s side he was akin to St Comgall, the great abbot of Bangor in the County of Down, who was of the Cruithne, or Irish Picts.

Maelrubha, following the national usage of family association, became a member of St Comgall’s society at Bangor. One authority states he became abbot of that monastery, but his name is not found in the catalogue of abbots recited in the Antiphonary of Bangor. His connection with this place seems, however, to have been kept up after he fixed his seat in Scotland, and his principal church in that country was regarded as an affiliation of Bangor.

In the year 671, Maelrubha, now being twenty-nine years old, withdrew from his native country to Alba. Two years expired before he obtained a permanent settlement, but in 673 he founded the church of Aporcrossan. Here he continued to exercise his abbatial office for fifty-one years, and he acquired so great a reputation for sanctity that he was regarded as the patron saint of this part of Scotland, whence he extended his influence both in the islands and on the mainland. In 722 he closed his labours, and his death is thus circumstantially recorded by Tigheamac:
“Maelruba in Apercrossan, anno lxxx.etatis sue, et tribus mensibus, et xix.diebus peractis, in xi. Kal.Maii tertie ferie die, pausit”

That is, Maelrubha died a natural death in Applecross on the 21 st day of April, being a Tuesday, his age being eighty years, three months and nineteen days.

Such is the Irish statement of his history. Scottish authorities, while they agree with the Irish in coupling the memory and name of the saint with Applecross, differ very materially from them as to his date, history and festival.

The Breviary of Aberdeen gives the saint’s day as August 27th. Its compiler narrates that a body of pagan Norwegians, landing on the eastern shores of Ross, slew Malrubius, and dragged his body into the thickets to be devoured by wild beasts. That his martyrdom occurred at Urquhard, and that on the spot where he suffered, a wooden chapel constructed, superseded by the parish church of Urquhart and that his body was removed from this place and carried to Applecross. In after times the lands of Applecross, in a radius of six miles from the Saint’s church, enjoyed the right of sanctuary. 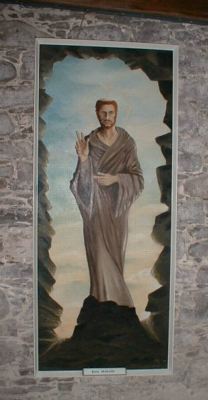 In the parish of Gairloch is Loch Maree. This loch was called Loch Ewe, but through time it has taken the name Maree from one of the islands called Innis Maree. The island, which is situated about the middle of the loch, has an ancient cemetery. The Rev Donald Macrae in the New Statistical Account, in reference to the name, writes:
There lived a good many years ago, in this part of the Highlands, a great and good man called Maree, who had his principal residence on this same island.

A Fair, called Feil Maree, used to be held at Contin on the last Wednesday of August. Later, from 1838, it was held in Dingwall. It was discontinued in 1880.
Until a comparatively recent date the cemetery of Applecross stretched from the riverside to the hillside. It contained many beautifully and curiously carved stones, slabs, obelisks, pillars and crosses.

Today, in the north end of the churchyard is the ruin of a small rectangular chapel-like building. Beside this ruin, at the end nearer the river, is a low mound, which has always been called Cladh Maree. This mound is the site of a small rectangular building, which seems to have been no more than a cell. We find at a level about nine inches lower than the present level of the ground, a paving of rude flat stones. Digging in the middle of this floor, we find at a depth of two feet a large plain slab of stone. This stone covers the stone kist in which was laid the mortal remains of Maelrubha, at full length, facing east.
The stone paved floor seems to indicate that the building was a cell of the monastery, under the floor of which Maelrubha was buried. Fragments of carved stone unearthed by the sexton are geologically native and the work unmistakably, according to the Society of Antiquarians, of the eighth century.

Edited by Sandra MacDonald from researches by her father, Kenneth Macrae, FSA, Applecross.