The Applecross peninsula (Scottish Gaelic: A’ Chomraich ‘The Sanctuary’) is a peninsula in Wester Ross, Highland, on the north west coast of Scotland. The name Applecross is at least 1300 years old and is not used locally to refer to the 19th century village with the pub and post office, lying on the small Applecross Bay, facing the Inner Sound, on the opposite side of which lies the Inner Hebridean island of Raasay.

This row of houses which is often referred to as ‘Applecross’, and is marked as Applecross on some maps, is actually called ‘Shore Street’ and is referred to locally just as ‘The Street’. The name Applecross applies to all the settlements around the peninsula, including Toscaig, Culduie, Camusterrach, Milltown, Sand, ‘The Street’, Lonbain and many others. Applecross is also the name of the local estate and the civil parish, which includes Shieldaig and Torridon, and has a population of 544. The small River Applecross flows into the bay at Applecross.

Extremely isolated, Applecross was only accessible by boat until the early 20th century, and for many years after that the only road access was over one of Scotland’s most notoriously treacherous roads, the Bealach na Ba’ (‘Pass of the Cattle’), which crosses the peninsula and reaches a maximum height of 2053 ft (626 m), below the 774 m high Sgùrr a’ Chaorachain. The settlement is now connected via a winding coastal road which travels around the edge of the peninsula to Shieldaig and Torridon. The road skirts the shore of the Inner Sound and Loch Torridon. 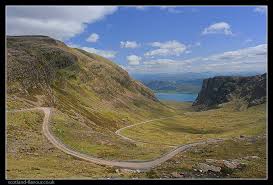 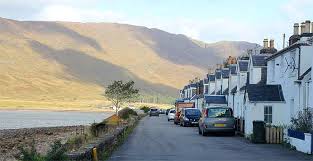 Applecross’s name is an anglicisation of the Pictish name Aporcrosan, ‘confluence of the [river] Crossan’ (Obar Crosain in modern Gaelic). Historically, the settlement is linked with St. Máelrubai (Old Irish form) or Maelrubha, who came to Scotland in 671 from the major Irish monastery of Bangor, County Down. He founded Aporcrosan in 672 in what was then Pictish territory, and was the monastery’s first abbot, dying on 21 April 722 in his eightieth year. The deaths of several of his successors as abbot are recorded in the Irish Annals into the early ninth century. The early monastery was located around the site of the later parish church (present building erected 1817). A large, unfinished cross-slab standing in the churchyard and three extremely finely carved fragments of another (or more than one?) preserved within the church are evidence of the early monastery. The surrounding district is known as a’ Chomraich ‘the sanctuary’ in Gaelic. Its boundaries were once marked by crosses. The stub of one, destroyed in 1870, survives among farm buildings at Camusterrach.

There are many churches dedicated to Maelrubha on Skye and throughout northern Scotland, the saint’s name sometimes taking distorted forms (e.g. ‘Rufus’ at Keith in Banffshire). Loch Maree and its holy island of Eilean Ma-Ruibhe (site of an early church and holy well) are both named after the saint.

The area around Applecross is believed to be one of the earliest settled parts of Scotland. The coastal settlement of Sand, just to the north of Applecross, is the location of a major archaeological site. 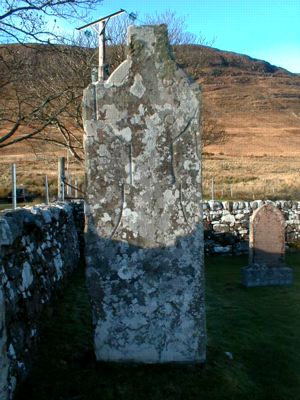