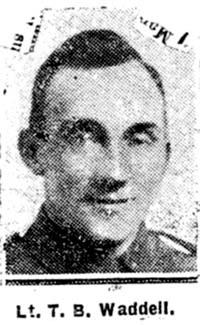 2/Lt. Thomas Bryson Waddell, of the county battalion of Seaforths, who, as already reported, was killed in action in France on 9th April, was the son of Mr William B. Waddell, Woodwynd, Kilwinning, Ayrshire. A native of Kilwinning, he was a bright pupil at the Parish School, and passed to Irvine Academy as a bursar. He was a medallist there in mathematics and classics, and his earlier promise materialised at Glasgow University, where he graduated M.A. and B.Sc. with honours in mathematics and natural philosophy. Full fledged in Jan.1914, he was appointed science and classical master in Dornoch Academy. In July, 1915, he joined up, and became a private in a service battalion of the Argyle and Sutherland Highlanders, receiving his training at Plymouth and other stations in England. A good shot, he was picked out and trained as a sniper, receiving a rank as Lance-Corporal. In May, 1916, he went to France, and for three months was on duty as a sniper. In August, 1916, by which time the authorities were looking round more particularly for likely officers, his qualities marked him out at once, and he came home to attend officers’ courses. He went to Gailes Cadet School, from which he emerged second in the list of candidates. He got his commission in January, 1917, and was posted to the 4th (Res.) Seaforths. At Ripon, Colonel Mason Macfarlane, recognising the qualities of the young officer, further special courses followed. In particular, apart from qualifying in musketry, he gained the certificate of a divisional anti-gas instructor, and on rejoining his unit acted as assistant in that capacity. He went to France in March, and had only been three weeks there when he fell at the head of his platoon. Lieut.-Colonel Unthank, in a letter to Lt. Waddell’s mother, confirms this statement, and speaks in terms of high appreciation of his worth and work.

“He was the embodiment of every manly virtue,” says a writer in a contemporary.
“He had a clean mind, a pure unsullied nature, an imperturbable disposition that never appeared to be touched by any mental disturbance, a bright and winning smile that radiated sunshine everywhere.” And, “If he indulged any feeling of pride whatever in the distinction he had received (at school or university), it was because of the joy it brought to a mother’s heart.”
“A most likeable lad, Colonel Mason Macfarlane said of him, “He would have gone far in his profession.”

“His passing has caused widespread sorrow in his native town, and aroused the keenest sympathy for the stricken home, but his memory will remain an abiding and precious possession in the hearts that now mourn for him.” In that sympathy with those who see the vacant chair officers and men of the county regiment join, and Ross-shire people share it sincerely and acknowledge the debt they owe to those who share in the war fortunes of her own immediate sons. 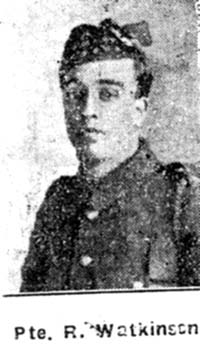 Watkinson, Private Robert [obliterated] and 2661 Pte. T. Armour, two Manchester men, who joined the Seaforths together, went out with the second draft together in March, fell together at Aubers Ridge in the van of the Black Isle Company when it leapt the parapets to advance. Pte. Watkinson was the son of Mr John S. Watkinson, 392, Eccles New Road, Weaste, Manchester. Private Armour’s people reside at 10 Gainsborough Road, Hr. Broughton, Manchester. 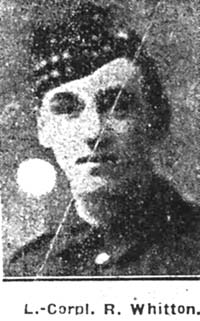 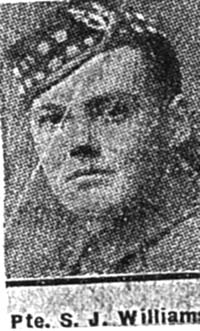 Pte. Sidney James (“Sid”) Williams, Seaforths, killed in action on 15th November, was a son of Mr and Mrs J. Williams, 84 The Grove, Ealing. Twenty-three years of age, he enlisted in the Seaforths in November, 1914. During the 19 months he has been in France he has been in the thickest of the fighting, having been wounded three times. On July 1st at High Wood he was twice wounded on the arm, and with some comrades buried alive. He was a smart young fellow and a fine specimen of manhood. His officer, writing to the parents, states: “His death has meant the removal of one of the original boys of A Company. Though your son was not in my platoon in the earlier days, I knew him well and always had a liking for him. But who could not respect such men when one works with them and to a certain extent shares their hardship and trouble.” Other two sons of Mr and Mrs Williams are serving. Trooper T. Williams, Life Guards, at present in hospital with dysentery after twelve months service in France, and Pte. F. T. Williams, R.A.M.C.

Mr and Mrs Williams would be grateful to hear from any of Pte. Williams comrades as to how he fell on 15th November, 1916.

A portrait of deceased appears above. 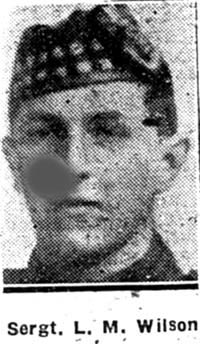 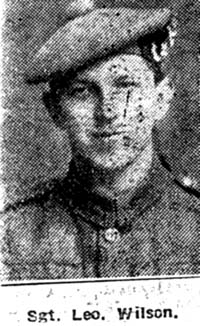 4277 Sergeant Leo. M. Wilson, formerly A Company, 4th (Res.) Seaforths, who was posted soon after going abroad in June last to the 2nd Seaforths, is reported missing on 14th October. Any information from his comrades will be greatly appreciated from his father, Mr James Wilson, 28 Silverdale, Sydenham, London, S.E.

To-day is reproduced a photograph of Sergt. Lionel M. Wilson, Seaforths, son of Mr and Mrs J. Wilson, The Trossachs, 28 Silverdale, London, S.E., who, first reported wounded and missing on 14th October, 1916, is now presumed to have been killed on that date.

Two sons of Mr and Mrs Wilson joined the 4th Seaforths. The elder son, Pte. R. L. Wilson, enlisted at the outbreak of war, trained with the battalion in England, went to France in November, 1914, and took part in holding the line during the first winter and the fierce and costly fighting at Neuve Chapelle and Aubers Ridge, in the spring of 1915. Twice wounded, he was discharged, but since February last has been attached to the A.S.C. in France.

Sergt. Lionel M. Wilson joined the 3/4th Seaforths here in the North in September, 1915, and completed training in England when the centre was removed to there. He underwent a course of instruction at York, and on rejoining his unit was promoted to sergeant. He underwent to France in June, 1916, and ultimately was posted to a line battalion of the Seaforths. One of a bombing party on the night of 14th October, he was posted missing the following morning. Enquiries were made extensively in these columns as to Sergt. Wilson’s fate, and otherwise through the kind offices of officers and men of his battalion. Every investigation possible was made to trace him, but unhappily without result. He was known to have been badly wounded, and the War Office now presume he was killed on the date stated.

Sergt. Lionel M. Wilson was a splendid type of soldier, inspired by the fine traditions of his corps, and proud to be one of the Seaforths. From many letters received from officers and men it is gratifying to his friends to know he was very popular and highly esteemed. These fine English born lads, most of them with intimate,Scottish connections, rallied magnificently to the call in the early days of the war, and in the long struggle and in many hard fights have proved their matchless valour, their glory in the call of Caberfeidh, and have earned singly and in the mass undying fame. Here in the Highlands there is warm appreciation of their service and full measure of true Highland sympathy with honour, like our own, so deeply bereaved.

See entry below for details of his brother R. L. Wilson 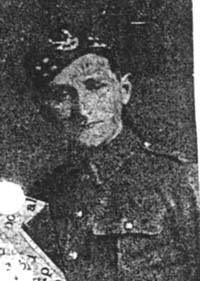 The above is a photograph of 22[remainder obliterated] Private R. L. Wilson, Invergordon Coy., who was wounded on 8th October. Private Wilson, who is a son of Mr J. Wilson, Trossacks, Sydenham, London, was a clerk in the employment of the Manchester and Liverpool Bank, London, previous to the war. Private Wilson has had rather an eventful experience. About two months ago he was buried by a shell explosion, and, as a result, when rescued, he was sent down to the Battalion Headquarters, where he performed light work as a clerk. At the end of a week he had a nervous break down, and was sent to hospital, and after being there a short time he returned to Headquarters on 1st October. A week later he was given a message to take to another part of the trenches. While on the way a large enemy shell hit the trench and completely buried him. He was almost in a state of collapse when being dug out, but before the operation had been finished , a further part of the parapet caved in, and he was buried again. When finally dug but he was black in the face, but subsequently recovered. Fortunately he received only some cuts and abrasions on the face, but he was severely crushed by the weight of the earth. He was sent to hospital on October 9th, and after a week or ten days there was moved down to No. 1 Convalescent Depot, Boulogne, where he now is. His memory and hearing are partly gone, but otherwise he has almost recovered, and hopes soon to report himself for duty.

See entry above for details of his brother Lionel M. Wilson 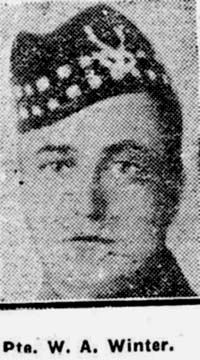 Reproduced above is a photograph of 204154 Private W. A. Winter, No. 9 Platoon, C Company, 6th Seaforths, reported missing between 9th and 12th April, 1918. Any information about him will be gratefully received by his mother, Mrs Winter, 4 London Road, Grantham. 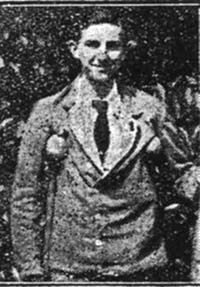 The above is a photograph of 2070 Private Tom Young, B (Dingwall) Coy., who was wounded on 27th May last. The photograph was taken in hospital at Agremont, Hyndhurst Gardens, Hampstead, where he is at present. His wound in the leg is progressing as well as can be expected. He is a son of Mr James Young, 10 Cranmer Road, London.