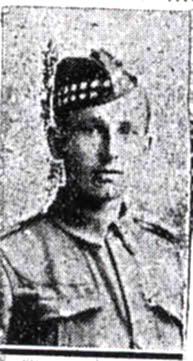 Private Geo. Allan is the second son of the late Mr John Allan for many years farm grieve at Kinnahaird Farm, Contin, Strathpeffer. Before joining the Seaforths Pte. Allan was also employed in the dairy department at Kinnahaird Farm. He went to France over a year ago, and has recently been admitted to hospital suffering from shell shock. His many friends, however, will be pleased to learn that his widowed mother has received information to the effect that he has rejoined his battalion.

There is a photo for a L Corp George Allan

Pte. John Cameron, Seaforths, who has been for the second time wounded, is a son of Mr and Mrs Cameron, Bank Cottage, Banavie, and nephew of Mr Hugh Maclean, carpenter, Moy Bridge, Contin, with whom he was employed before enlisting. Cameron is one of the gallant band of patriots who joined the county Territorials after the outbreak of war. He crossed over to France with them in Nov., 1914, and was wounded 18 months ago. After a short period of hospital treatment in England he was soon able to join his unit. His wounds are being treated in Hoole House Hospital, Chester, where he is making good progress. A portrait of Pte. Cameron appears in to-day’s paper 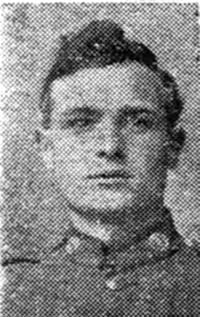 Private W. Emslie, Gordons, formerly of the Lovat Scouts, eldest son of Mr and Mrs Emslie, Kinnahaird, who is undergoing treatment for his wounds in an English hospital, has seen a good deal of service, both in the East and West. Having enlisted in the Lovat Scouts early in September, !914, he served with them in the Dardanelles and elsewhere. He was admitted to hospital in Malta, and subsequently was sent to England, where, after a good recovery, he was drafted into a Highland regiment bound for the Western Front. Later on he was transferred into the Gordons, with whom he fought until he was wounded. He is making good progress towards recovery. 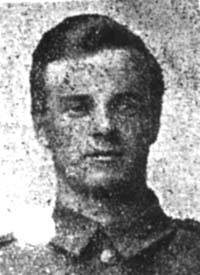 Piper Donald Fraser whose photograph appears above is the seond son of Mr and Mrs Fraser, Glebe Cottage, Contin. He is 22 years of age and a gardener to trade.

He served his apprenticeship at Home Rose, Croy, and afterwards came as a journeyman to Coul Gardens, Contin. Being a territorial, he mobilized with the 4th Camerons and saw a lot of fighting with them in France being present at all the engagements in which the battalion took part. He had many close shaves. On one occasion his crest was blown out of his glengarry by a sniper’s bullet. He has however so far escaped without injury. 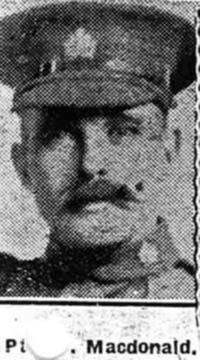 Private D Macdonald, Canadians, wounded, whose photograph appears today, is the youngest son of Mr and Mrs Macdonald, East Cottages, Kinnahaird, Contin. He emigrated to Canada nine years ago, and was engaged on the land when he heard his country’s call, and promptly responded like many of his brave comrades who fell on the Vimy Ridge, where Macdonald was wounded. Private Macdonald has made a complete recovery. 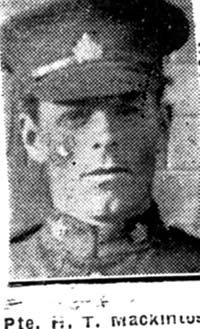 Pte. Hugh T. Mackintosh, Canadians, whose photograph appears to-day, is the second son of the late Mr and Mrs Mackintosh, Achilty Hotel, Contin, and the nephew of Mr G. S. M. Mackintosh, accountant, Dingwall. Pte. Mackintosh, who has just been home on leave, went to Canada about 12 years ago, and had been farming most successfully in the Western Provinces there. He left his brother in charge of the farm to come over to do his bit. Before going abroad Pte. Mackintosh was a law clerk with Messrs Duncan & Duncan, solicitors, Dingwall. 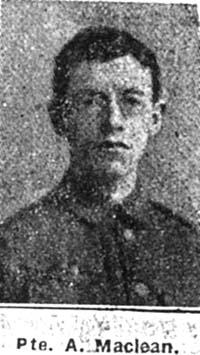 Maclean, Private A., 1674 (18), Riverside Contin, died of wounds in Boulogne Hospital. A bright lad, he was dux in Contin School and a bursar at Dingwall Academy. Subsequently became draper, and joined up on mobilisation proceeding to France with the third draft in March, 1915. 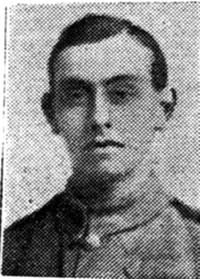 Pte. Hugh Maclean (whose photograph reproduce) is the youngest son of Mr and Mrs Maclean, Jamestown, Contin. He joined a Seaforth battalion about 18 months ago, and took part in some stiff fighting on the Western Front last December, when many of his comrades went under. He has undergone treatment for diphtheria and trench fever in an English hospital. He has been spending a few days with his parents before rejoining his unit.

Another brother is with a Canadian engineering battalion. 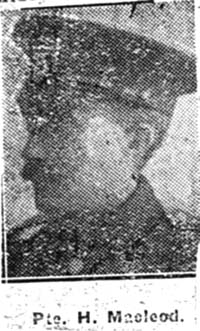 Today is reproduced a photograph of Pte. Hugh Macleod, RAMC, who was gassed on the St Quintin front during the retirement. He is a son of Mr R Macleod, Torachilty, Contin, and in pre-war days was a prominent member of the 4th Seaforth pipe band. He is at present in the Cambuslang War Hospital, and getting on well. Pte. Macleod will be remembered as a clerk in the office of Mr W R T Middleton, solicitor, Dingwall. 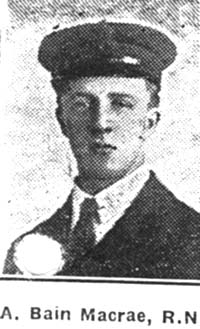 CONTIN BOY IN THE NAVY

The friends of Mr Alec. Bain Macrae, eldest son of Mr and Mrs John Macrae, Holly Cottage, Contin, will be pleased to learn that he has passed successfully all his oral and technical examinations in training on HMS Hermione. He has now been transferred to Dover as second engineer in the Motor Boat (Yacht) Patrol Service.

Reproduced today is a portrait of Corporal Alexander Matheson, 7th Seaforths, who laid down his life for his country at Festubert, near La Bassee, on July 1st, 1915. He was out with a party covering engineers at work when he was killed. Deceased was the only son of the late Mr Alexander Matheson, Tarvie, where he was born in 1996. He was an old Contin schoolboy, having been under that revered old dominie, Mr Macglashan. A well known athlete, he often took part in Highland games, and was a regular competitor at Strathpeffer. He was also a keen sports man and an excellent shot. Prior to the war he served in the Lovat Scouts, but in 1913 he joined the Metropolitan Police, and during his first year there he gained the prize with the rifle.

On 8th August he enlisted in the Seaforths, and was sent to the 7th Battalion, where he was appointed scoutmaster under Lieut. Kerr. A sister of the deceased, Miss Mary Matheson, served for three years at the Canadian Headquarters in England, and later with the Canadian Medical Corps.

A step-brother, Mr R. Munro, served in the Wartime Hosiery Department of the War Office at Leicester for twelve months. 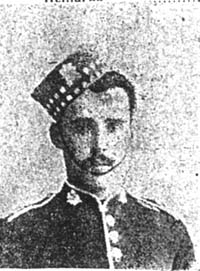 11536 Lance Corporal Hugh Tolmie, 2nd Battalion Scots Guards, of whom the above is a photograph, was officially missing on 18th May 1915, and for the sake of his wife and four children, who are at present living in London, any information as to his whereabouts would be gratefully received by his mother, Mrs Ann Tolmie, c/o Mrs Bethune, Post Office, Contin. Lance-Corporal Tolmie was out of the Scots Guards and employed as a police constable, but when the war broke out he rejoined his regiment. The deepest sympathy is felt for his mother and his anxious wife and family.