The Ross-shire Journal of May 1923 reported as follows:

Contin and District people have done honour to their dead in the monument they have erected in the village to the memory of its sons, who fell in the Great War.

The monument is one of the most original and unique in the county. The unveiling ceremony was carried out by Colonel A F Mackenzie of Ord, CMG, MVO, who was supported by Colonel D Mason-Macfarlane of Turin, CMG, CBE, who was tenant of Craigdarroch when War broke out.

IN THE DAY OF THE ORDEAL THEY ENDURED, NOT COUNTING THE COST FOR THE SAKE OF RIGHTEOUSNESS AND TRUTH THEY RENDERED THE SUPREME SACRIFICE – THEIR LIFE. WE HERE HIGHLY RESOLVE THAT THESE DEAD SHALL NOT HAVE DIED IN VAIN. 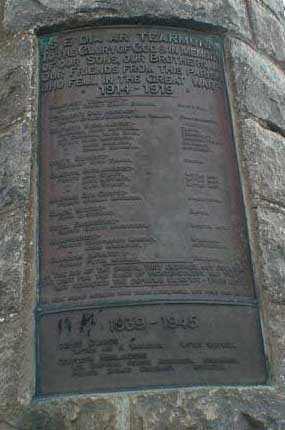