Contin is a small village set amongst a vast contrast of scenery from sunshine filled glens to snowy mountains.

Local attractions include the Achilty forest walk and Rogie falls.

The surrounding rivers (Blackwater and Conon) are filled with trout and salmon, so it would be of no surprise that Contin is home to many a keen angler.

The church in Contin is dedicated to St Maelrubha or Mael Ruba. The present building dates back to the 18th century but there has probably been a church on this site since the 7th or 8th century. 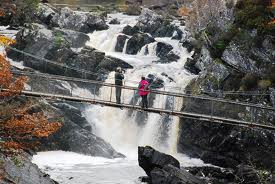