David MacAndie was born and brought up in Portmahomack, and educated in the Tarbat Old Public School. Subsequently he emigrated to Canada, where he did very well. When war broke out he at once offered himself and ultimately came over to this country. In France he rapidly rose from the ranks, becoming Sergeant. very soon, while after Vimy Ridge he was made Sergeant.-Major. He won his commission on the field as Lieutenant without being sent to a training camp. Details of his time during the Great War were recorded in an extract from the Ross-shire Journal dated 18th September 1917.

RCHS Note: The Ross-shire Journal extract about Sergeant Major David MacAndie is detailed elsewhere on this website. To read this extract click on the button below:
Click here

The Unveiling of a Calgary Highlanders Portrait

In August 2016 Captain David Macandie’s nephew, Mackenzie Macandie, was invited to Canada in order to participate in a ceremony honouring his relative, including the unveiling of a portrait. Mackenzie (‘Mac’) owns many of the artefacts belonging to Captain Macandie, including his medals, and provided a black-and-white photograph from which the artist, Jamie Morris, took his inspiration.

The report which follows is courtesy of CBC News:

The Calgary Highlanders have unveiled a portrait of David McAndie, one of the most decorated members of the regiment whose bravery continues to inspire soldiers to this day. 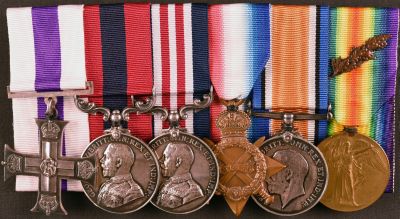 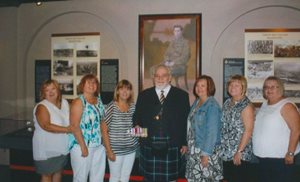 Mac MacAndie, holding his uncle’s medals, and his cousins, with their uncle’s portrait behind. 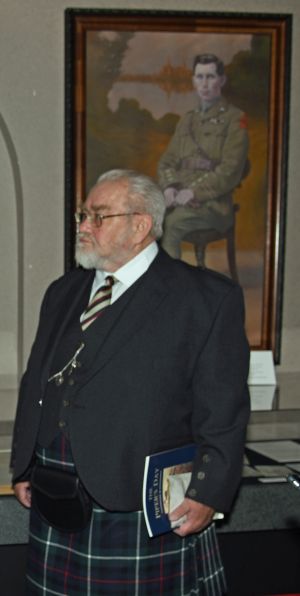 Mackenzie MacAndie with his uncle’s portrait.

Attribution: photographs on this panel courtesy of Mac MacAndie

The report courtesy of CBC News:

The Calgary Highlanders have unveiled a portrait of David McAndie, one of the most decorated members of the regiment whose bravery continues to inspire soldiers to this day.

McAndie joined the 10th Battalion, Canadian Expeditionary Force, as a Private a century ago.
In the ensuing three years, he fought at the Battle of the Somme, Vimy Ridge, Hill 70 and Passchendaele, earning numerous decorations for bravery in the field. By 1918, McAndie had been promoted to Captain.

“He exemplifies the fighting spirit of all ranks of the regiment,” said Major Peter Boyle of the Calgary Highlanders, which perpetuates the 10th Battalion to this day.
“He was a Corporal, he was a Sergeant and then an Officer, and earned gallantry leading his men at all those levels, and that’s very significant in our opinion.”

The new portrait of McAndie was unveiled at the Calgary Highlanders Regimental Museum and Archives.

“He volunteered to go fight for Canada and fight for the Empire in 1915,” Boyle said.
“I think it’s important for Canadians and Calgarians to remember that so many of those who died were volunteers.”

McAndie was killed in the final 100 days of the war, kilometres behind the front lines.
“After being through such violent action, he was killed near the battalion’s command post by a stray German shell,” said Sam Blakely, a former Calgary Highlander and current volunteer with the museum. “He had the bad luck to be walking toward his command post.”

Less than a week earlier, McAndie had been awarded one of his highest honours – the Military Cross – for “conspicuous gallantry during an attack” on 8 August 1918.

“He led his company splendidly, capturing and consolidating the position”, his award citation reads.
“He then rapidly pushed his men forward and filled an important gap in the line. Later he captured and held a very strongly garrisoned position considerably in front of the final objective. He did very fine work.”

Lt.-Col. Kyle Clapperton, commanding officer of the Calgary Highlanders, said McAndie’s is a “fascinating story” that still resonates with soldiers a century later. “These stories we identify with those now and they inspire us,” he said.

About half a dozen portraits of significant regimental leaders, mostly former officers, have been commissioned in the past but Boyle said this one is unique.
“Captain McAndie is the first one we’ve commissioned purely for his brave acts,” he said.
Calgary artist Jamie Morris, who painted the portrait, said it had an impact on him as he worked on the piece, based off an old studio photograph. “I kind of got lost in the person behind the portrait,” Morris said.

“The more I worked from this black-and-whiote photo, putting my own colour scheme to it, the more it seemed like he was coming to life. It was very much an honour to be in this position, to bring one of the Calgary Highlanders’ most presigious members to life again and give his name the respect it deserves.”

Boyle said the plan is to hang the portrait in the Mewata Armoury for a while, to share it with current soldiers, before putting it on public display at the museum. 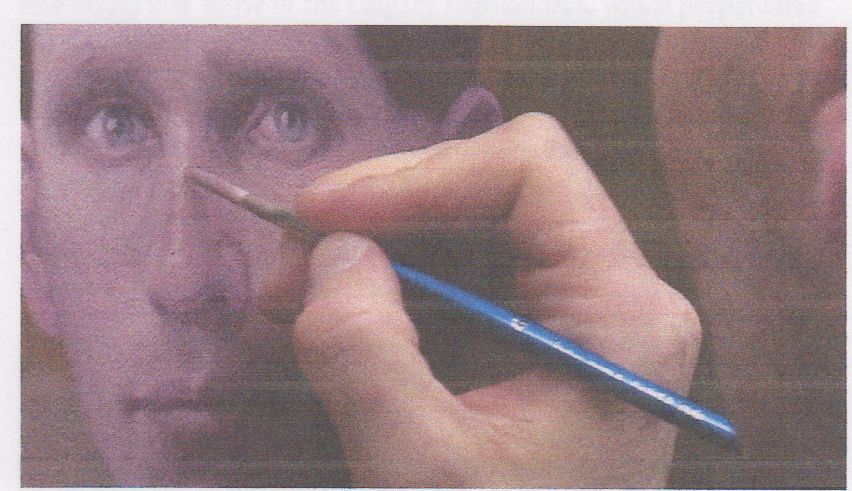 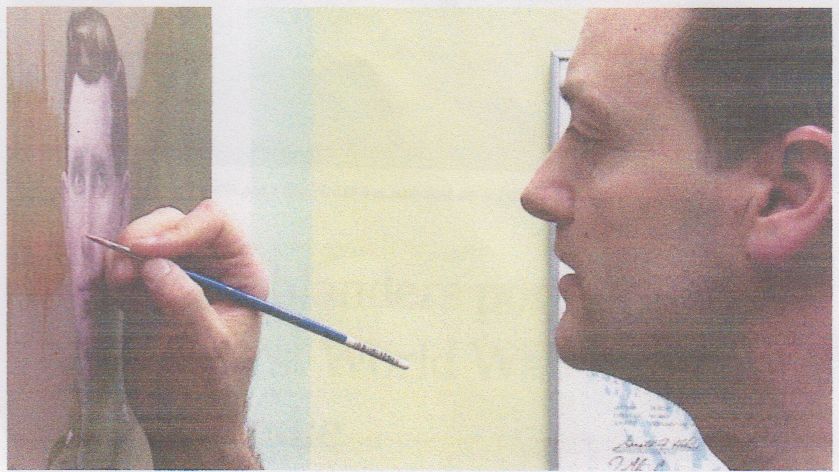 Two photos showing Jamie Morris at work on the portrait 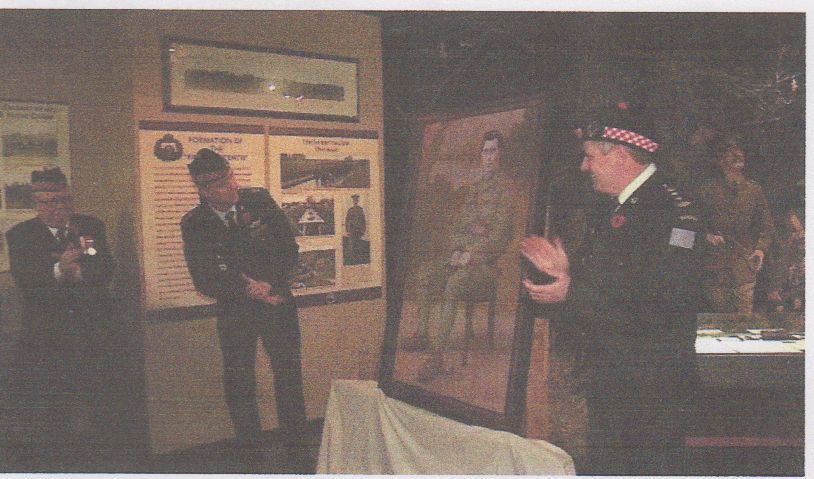 The portrait unveiled at the Calgary Highlanders Regimental Museum and Archives. 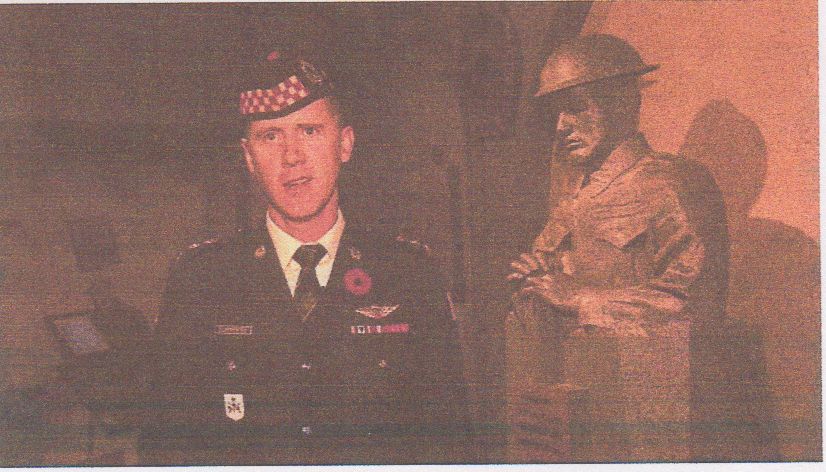 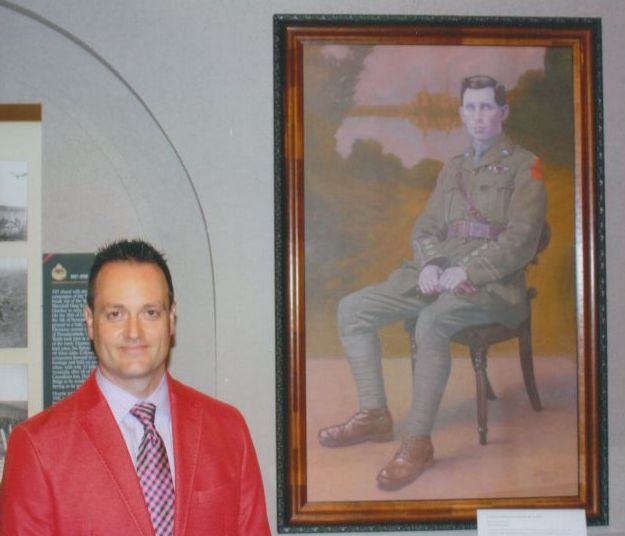 Jamie Morris, the artist, with his painting of David MacAndie. 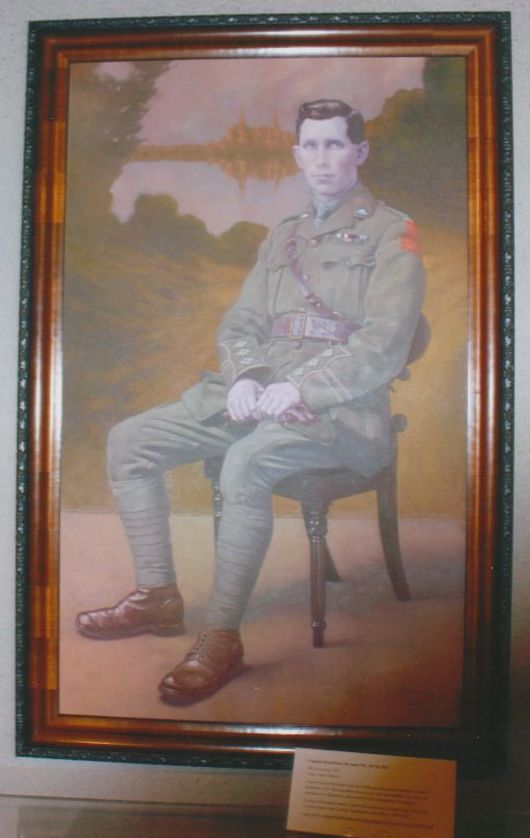 Attribution: Photographs on this panel courtesy of Mike Symington/CBC.

In January 2018 it was announced that a further honour has been made in memory of Captain McAndie. A small valley – or coulee – located near to where Captain McAndie lived in Assiniboia, Saskatchewan, when he emigrated to Canada as a teenager, has been named in his honour.

Captain McAndie was nominated for this ‘geomemorial’ by Lt Col Peter Boyle, the curator of the Calgary Highlanders Museum, which catalogues and documents the force with which McAndie served as a captain. 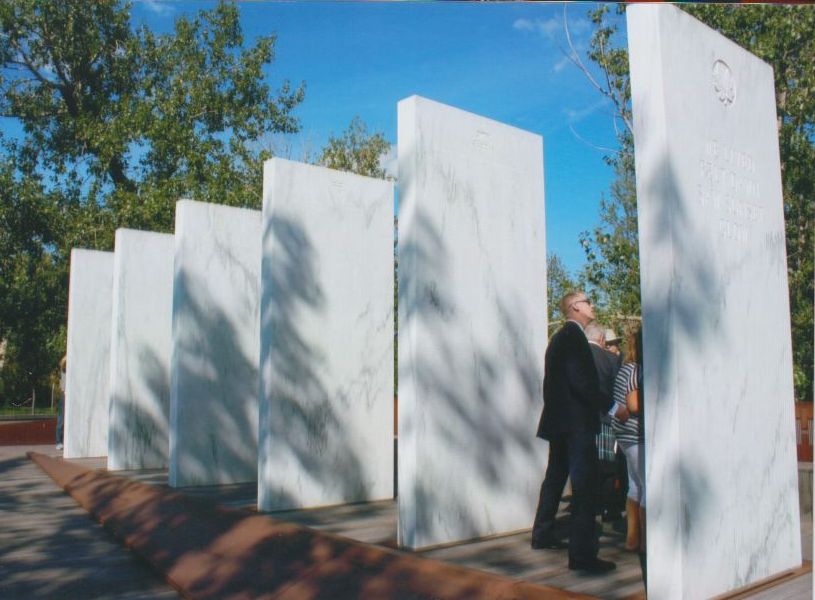