Tain Indoor Bowling Club was formed 22 years ago to complement the outdoor bowling provided by the St Duthus Bowling Club. The club meets in the main hall of the Duthac Centre which has room for three 15 metre carpets. For a relatively modest annual subscription (currently £8) and a 50p-a-time playing fee, members have the choice of three afternoon and three evening sessions per week in winter and one evening session throughout the summer. A number of trophies are played for but it is mainly a social club and does not enter external competitions. New members are always welcome. 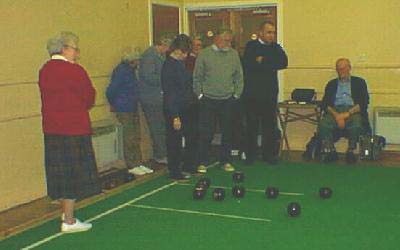 The History and Development of the Club up to 2000

The club was formed in 1978. At a public meeting initiated mainly by Reggie Stone, a Steering Committee was set up to form a constitution and look into what was involved in establishing an indoor bowling club. June Walker acted as Chairwoman and did most of the fact finding eg. sending away for prices of carpets. It was decided that the club membership would be open to anyone over 16 (in April 1981 this was lowered to 14 subject to committee approval ) and was not to be limited to Tain residents only. The current club has members from Dornoch, Edderton, near Nigg and Balintore, although the majority come from Tain. 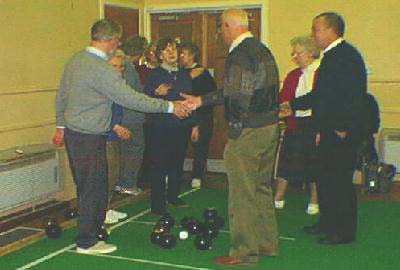 Naturally, the composition of the committee has constantly changed over the years, but two people deserve special mention. Marjory Reid became Treasurer in April 1981 and has efficiently filled this post right up to and including the present time. Then in October 1984, Marion Watson became Secretary and she too remained in this capacity from then on until her sad and untimely death in February 2000. Between them these two ladies have been the backbone of the club and Marion will be sadly missed, not only for her sterling work but as a gentle, friendly, enthusiastic player.

The initial funding for the purchase of 3 carpets, 4 sets of bowls and 3 jacks came from a grant of £1000 from the Tain Common Good Fund supplemented by the proceeds of an Auction Sale organised by the Steering Committee and conducted by Mr. John Fraser and also a Sponsored Slim. Since the inaugural year, the annual subscriptions and playing fees have been the main sources of funds augmented by occasional raffles, the sale of lemonade (from 1982 on) and the introduction of a “lending library” (from 1987 on), books being contributed by club members. However, in the 1995-96 season new carpets were purchased. These were again mainly funded by a grant from the Tain Common Good Fund plus money from the sale of the old carpets and some sets of bowls.

The original subscription of £3 remained for 8 years since which time it gradually increased, in response to increasing cost of hiring the hall, to £8 in 1992 which is what it still is today. 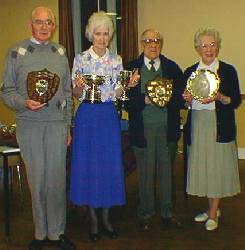 Membership in the inaugural year was 53. The number of members then gradually increased to a highest point of 77 in the 1985-86 season. The 1986-87 season saw a drop in membership to 47 and since then it has been no higher than 57 and is currently 45. The reason for the sudden drop in 1986 was due to a second indoor bowling club being formed. A new club house had been built for the St Duthus Bowling club which had space for indoor bowling so a joint meeting of both clubs was held to discuss the location of indoor bowling in the future and the possible amalgamation of the clubs. The majority vote was against amalgamation and for the continued use of the Duthac Centre. This resulted in a second indoor bowling club, the St Duthus Bowling Club, coming into being.

Since the club was formed two Life Memberships have been awarded for special services and commitment to the club. The first was to Jim Bremner (sadly no longer with us) in March 1993 following his 90th birthday and the second to Cissie Edwards.

The first year of the club was operated on non-competitive games only with a tournament being held on the closing day. Since then a number of club competitions have been set up, starting off with a League Competition introduced in 1979 for rinks of 4 players playing for a trophy donated by Mrs. Connie Morrison. In 1980, Singles and Pairs Competitions were introduced followed by a Triples Competition in 1987 (for a shield presented by Dychem,) and finally a Two-ball Pairs in 1991. A friendly Round-Robin competition (with minor prizes at stake, such as a small box of chocolates) has now been taking place for some time on Thursday evenings and also on closing days before the Christmas and summer breaks. Although these competitions are reasonably keenly contested, the main emphasis has remained a social one and outside involvement has mainly been confined to a friendly game between the ladies of Tain and Invergordon clubs. This has taken place annually since 1985. 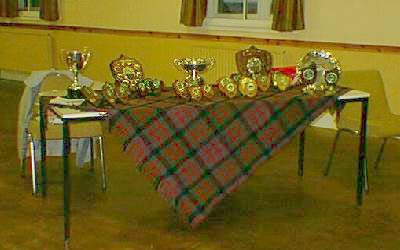