Tain and District Flower Club caters for all ages, abilities and interests, from those who are mainly looking for an evening out in a friendly atmosphere to those who are fairly serious flower arrangers of competitive standard. There are eight monthly meetings (omitting January, February, July and August) held on a Wednesday evening and attended by a visiting demonstrator. Meetings normally take place in Tain Parish Hall at 7.30 pm. In addition, the club normally has one or two outings a year to somewhere of floral interest and members sometimes contribute floral arrangements to local events.

The club was formed at a meeting held on 30th May, 1979, chaired by Margaret Hine, Edderton. It was agreed that the club would meet 8eight times a year from March to December but leaving out the holiday months of July and August, that a Wednesday was a suitable evening and the club would be run by a committee of ten. This same format has remained more or less and although other evenings have occasionally been used Wednesday evening has continued to be the regular club night. 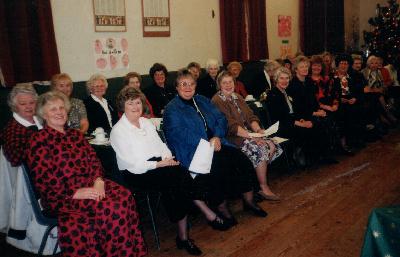 The venue for club meetings and AGMs during the first few years of the club was the Clan Ross Rooms of the Royal Hotel. This was followed by a few years in the Duthac Centre and Knockbreck Primary School before Tain Parish Hall finally became the location.

Demonstrations form the main content of the club meetings and over the years members have been entertained and informed by a wide variety of skilled and interesting visiting demonstrators from all parts of Scotland and even South of the border, mainly from Yorkshire, Lancashire and other parts of Northern England. On one occasion (April 1990) the demonstrator came from County Down in Ireland. Throughout the years the demonstrations have covered an amazing breadth of themes and an equally amazing variety of materials have been used to complement the major players, the flowers themselves.

A look through the programmes shows that there has hardly ever been a duplication in the title of a demonstration.Among some of the more unusual and fanciful themes are the following – ‘Cabbages and Kings’; ‘A Magical Mystery Tour’; ‘By Land, Sea and Air’; ‘Shakespeare’s Plays in Flowers’; ‘A Touch of Eastern Promise’; ‘Frae a’ the Airts’; ‘Musical Highlights’; ‘Journey’s End’; ‘Serendipity’; ‘Fantasia’ and ‘Constellations’. 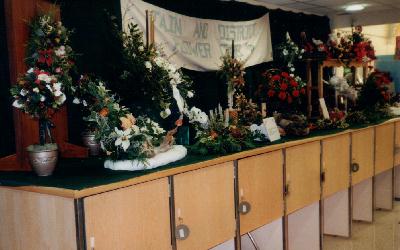 The other main element making up the club meetings is the Competition for floral arrangements submitted by club members, usually judged by the visiting demonstrator, and there has been no lack of imagination in producing themes for these either. There have been arrangements in shells; eggcups; frames; wineglasses; Easter baskets and on Easter bonnets. There have been unusual themes such as ‘Spring Fever’; ‘Summer in France’; ‘Double Vision’; ‘New Beginnings’; ‘Gone to Pot’ and ‘Things that go bump in the night’. December AGMs have produced Christmas table decorations; decorated parcels, calendars/cards and yule logs; Christmas decorations and illustrated themes such as ‘Candlelight’, ‘Christmas Swag’, ‘Starlight’ and Millenium Reflections’.

The club has ventured forth from Tain on a number of occasions. As well as visits to demonstrations in Inverness and to Golspie for joint meetings with Sutherland Flower Club, outings have taken place to NAFAS Annual Shows in Falkirk (1991 and 1993), Glasgow (1992) and Edinburgh (1998); to Inverewe Gardens (1990), Spinningdale Nursery (1996), Howden Garden Centre (1997) and Bught Floral Hall (1999).

Fund raising is important for any club. In early years, Bring and Buy Sales and Coffee Evenings were tried and in 1982 a Function held in the Duthac Centre realised around £500, once expenses had been deducted, half of which was given to charity. In most of the 1980’s up to 1990, a number of Flower Festivals/Fayres were held. In more recent years, in addition to the traditional Sales Table at club meetings, efforts have concentrated on Silent Auctions and an annual Street Sale, usually in August, augmented by annual subscriptions and nightly fees from visitors. 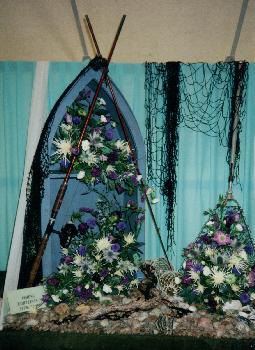 Involvement in local events has taken a number of different forms. Apart from the club’s own Flower Festivals, in 1992 and 1993 it took part in competitions held as part of the Tain Gala Programme and in 1995 contributed displays to the ‘Flowers and Crafts’ event at Nigg Old Church and Nigg Hall. Displays were also provided for the Nigg Flower Festival and Photographic Exhibition in April-May 1998 and the Kilmuir Easter Church Flower Festival in August 1998. In December 1997, the club put on a display at the entrance to the Coffee Shop within the Tain Co-op Superstore on Morangie Road. Then in August 1999 two members contributed a striking display entitled ‘Fishing’ for the Sutherland Scenes exhibit at the Dornoch Show. However, the highlight of the club’s history was surely being given the responsibility, in 1984, for the flowers for the Queen’s visit to Kylesku to open the new bridge.

The club has been thriving now for over 20 years. The 20th Anniversary Dinner was held in the Mansfield Hotel, complete with a superb Anniversary Cake cut on the night of the occasion by founder member Isabel Hislop who has since celebrated her 90th Birthday. On its past record there seems no reason why the club should not continue to be successful for at least the next 20 years. 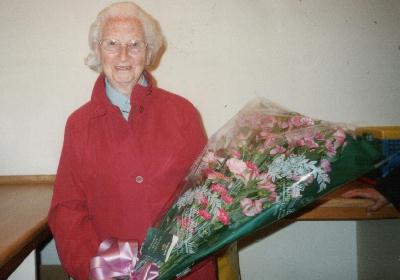 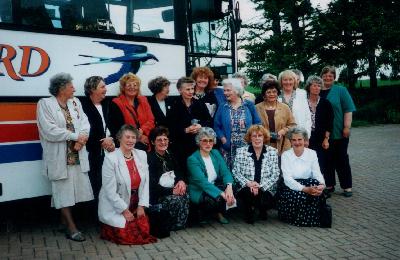 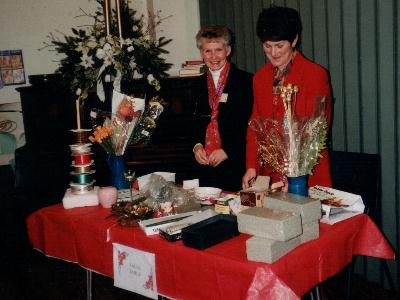 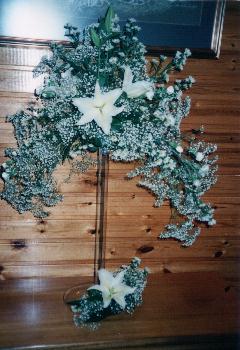 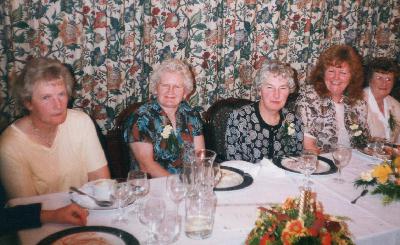 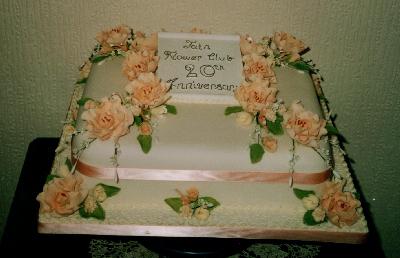