During the first World War in 1915 there was a widespread epidemic of typhoid in Serbia. The fight against it was too heavy a task for the Public Authorities.

The Serbian Government used the offices of the Red Cross organisation to apply for help to various friendly European Countries.

Among the medical staff of one Scottish mission was Dr. E. Ross.

Dr. Ross worked in the improvised “Stobart Hospital” in Kragujevac. Unfortunately, she and her two assistants fell victim to the severe illness they were fighting and were buried in various places of the Kragujevac Central Cemetry. Their graves have been looked after by the local population.

In esteem of Dr. Ross’s personality and to simplify the maintenance of her tomb, the Red Cross organisation, together with World War 1 veterans agreed to have both her assistants’ graves moved to her side.

In the book “Five Centuries of Kragujevac” there is a mention of the Scottish Mssion’s work. Several documents to this effect exist in local museums and archives. In memory of Dr. Ross, a street in Kragujevac bears her name.

Members of the Kragujevac Red Cross and World War 1 Veterans organisations send their greetings to all who might be associated with these typhoid combatants and show interest in their tombs. Any further information will be supplied gladly by the “Savax Boraca Kragujevac” (War Veterens Association – or Red Cross Section of the Kragujevac Community)

The inscription on all these tombstones are in English with this Serbian text underneath:

In memory of Dr. E. Ross and two nurses who died in 1915 in our town while attending to our ill and wounded soldiers. Grateful soldiers from the Saloniki front. Renewed 1977.

Alongside are also buried Mabel Dearmer and Lorna Ferriss of the Stobart Hospital, Serbian Relief Fund. 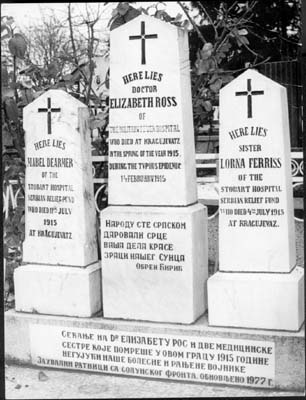 Here lies Doctor Elizabeth Ross of the Military Fever Hospital who died at Kragujevac in the Spring of the year 1915 during the Typhus epidemic.

On Dr. Ross’s tombstone there is also a verse by the poet, Cyril Obrien:

You gave your hearts to the Serbian folk, and by your work embellished the rays of our sun.

I understand that there is a saying among the people here which goes: ‘To go round in circles, like rain around Kragujavac’. Perhaps celestial blessings have sometimes passed the hard-working farmers of this region by, but on the other hand I know that misfortune, great misfortune, has not failed to hit this town and this country.

So it was during World War I, and again on 21 October 1941, the day when so many people of Kragujevac died in a Nazi atrocity.

Today we are here again together on sacred ground, eighty years after the terrible epidemic which mowed down the people of Kragujevac and Serbia, in which over 300,000 died.

Throughout those terrible days, members of the British Medical Mission, composed mainly of women doctors and nurses, stood by the Serbian people, many of them sharing their fate. They came to help, touched by the sacrifices borne by the Serbian people in the consistent carrying out of their commitment to their allies.

Among them was Elizabeth Ross, the anniversary of whose death we commemorate today. Also buried here was the young Louise Jordan, Margaret Neil-Fraser and Agnes Mitchell, later Mabel Diermer and Lorna Ferris.

Their deaths were undoubtedly heroic, as the following words, spoken at the funeral of Dr. Elizabeth Ross in Kragujevac, eighty years ago today, testify:

‘Dr. Ross, you came to help this country in which we bury you today. By your unstinting help, you have fulfilled your duty as a Christian, as a British woman, as a woman and a scholar. My country thanks you. Your memory will live in every Serbian heart, and your outstanding example of self-deniai arouses admiration and love for your British homeland, the Britain you belong to, the greatness of your English nation.’

Rendering homage to their deeds today, I too must stand in admiration of what these women did. Doctor Vukovic has said that this was the highest expression of philanthropy, unsurpassed in the history of mankind. I must also express my admiration of you, the people of Kragujevac, who cherish the memory of my dead countrywomen. It is this that keeps the memory alive among us today of Elizabeth Ross, Louise Jordan, Margaret Neil-Fraser, Agnes Mitchell, Mabel Diermer and Lorna Ferris.

I can therefore repeat the words spoken here before that Kragujevac is the town which so splendidly, perhaps uniquely, unites the people of Great Britain and Serbia. The links thus forged between our two nations are not forgotten and live forever. This we have shown today as we pay homage to those who laid down their lives for both our nations. 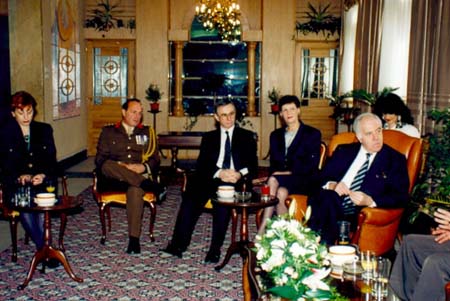 Some of the Serbian dignitaries present at the commemoration 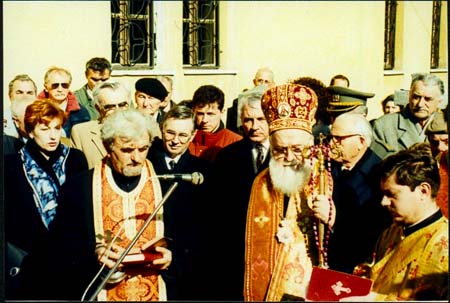 Part of the commemoration ceremony. 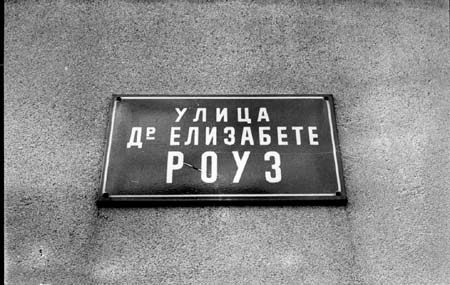 Name Plaque of the street named after Dr Elizabeth Ross

Fresh flowers placed on grave during a recent commemoration (1995)

Elizabeth Ness MacBean Ross was born in Tain in 1878. She studied medicine at Glasgow University graduating in 1901. For several years she was the local doctor on Colonsay and Oronsay and in 1907 left to go to Iran. She worked among the Bakhtiari tribesmen in the Zagros Mountains with long periods out of contact with fellow Europeans. The photo on the right shows her in Bakhtiari dress. She described her adventures there in A Lady Doctor in Bakhtiari Land. She worked her way home from Iran as a ship's doctor, studied tropical medicine in London, went to Japan on the Glenlogan as the first female doctor on a liner and died of typhus in 1915 while working as a military doctor in Serbia. She was buried at Kragujevatz, where her dedication and courage are still greatly honoured. We are grateful to Mrs Edith Ross of Tain for permission to use the original material in this presentation
Slideshow
View 32 photos