The Morrich More is a triangular shaped area of approx. 12 sq mls lying north of the Fendom and north east of Tain. It consists of a low sandy plain mainly below 5 metres, a former sea bed, which has seen many periods of cyclical advances and recessions of the tide since it was elevated above sea level after the last Ice Age. In more recent times, erosion of the north west shore has continued over a long period resulting in a considerable part of the shore disappearing even within living memory. The material thus removed was carried north east by longshore drift and deposited round the corner. Thus the north east shore advanced outwards into the sea at the expense of the north west shore.

Eroded dune on NW edge of the Morrich More 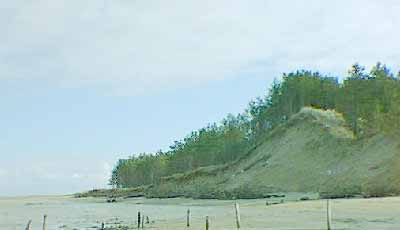 Today the Morrich More is a desolate waste of moor and marsh but tradition suggests that this was not always the case and that the area underwent a “Culbin sands” experience with wind blown sand burying crops and houses, making the area an arid waste. Hugh Miller, the famous Cromarty geologist, having explored the area, supported this theory. However, its more modern state was such that the Burgh of Tain willingly sold the land to the Air Ministry and the Tain Bombing Range was first constructed between the two world wars. Its proximity to the RAF stations at Kinloss and Lossiemouth and its excellent weather record have resulted in it becoming one of the busiest bombing ranges in Britain used by RAF, USAAF and NATO planes. Prior to this it was used by the Territorial Army for camps and rifle practice.

Part of the Morrich More wasteland 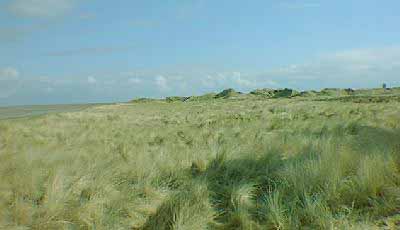 The north west shore of this region is edged with sand dunes of varying height, the highest of which are to be found about half way along this shore culminating in a point called Cnocan Mealbhain. South west from Cnocan Mealbhain is an area of forest planted with Corsican pine trees, partly as a measure to stabilise the dunes and prevent further encroachment inland of wind blown sand and partly to hinder coastal erosion. In this latter aim it has not been entirely successful and quite a number of trees have been undermined during storms. It was an experiment conducted by the local Forestry Commission unit under the management of George Small who devised a system of using tree thinnings as thatching on the faces of the dunes among which the young trees were planted. This thatch prevented the sand being blown away untill the young trees became properly rooted.

Warning signs at the start of the bombing range 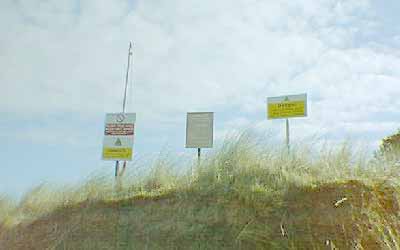 On the extreme edge of the Morrich area, immediately south west of the forest, part of this area are the sandy links on which Tain Golf Course was built.

Trees lost due to erosion 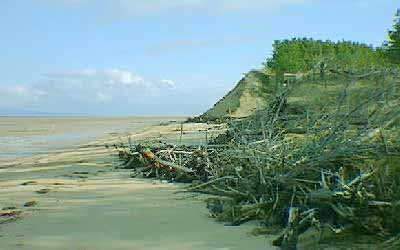