The foreshore immediately in front of the town consists of quite a wide stretch of mud or sand flats uncovered at low tide. Contained within these are the valuable Mussel Scalps which have long been a source of revenue to the town. Although the area exposed by the tides continues along the Dornoch Firth to just before Portmahomack there is a narrow stretch of sandy beach along the shore of the Morrich More. It is not a pretty beach as much of the best sand has constantly been moved along shore and attempts to stop erosion have meant the dumping of various materials some of which are now spread accross the beach. To reach the best sands one has to walk quite a distance. However, there are good views across the firth and it is a good place to walk, with or without a dog, and also for
observing bird life.

The first substantial effort to prevent erosion was when the shore along the edge of the Links and a section on the other side of the suspension bridge as far as the Plaids was faced with blocks of stone from Ardchronie quarry. This work was done by two Irishmen sometime in the 1950’s and proved very successful. 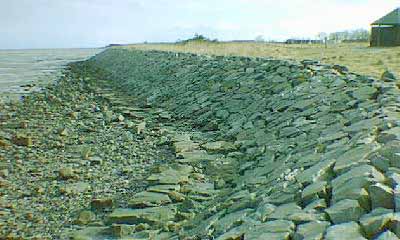 Some years later George Small, the local head forester, constructed barriers at right angles to the shore, similar to groynes only made from lines of wooden poles interwoven with wire netting and branches, to collect the sand and hopefully protect the forestry plantation. The idea was sound but unlike stone groynes they were not substantial enough and would have required constant replacement.

Round about the same time, Ian MacPherson, a Greenock businessman who was a devotee of the Annual Golf Tournament in Tain, at his own expense had a line of gabions (stone filled wire cages) placed on the beach in front of the site of the 11th (Alps) green. Without his generosity it is doubtful if this green would have survived intact.

All that remains of George Small’s efforts 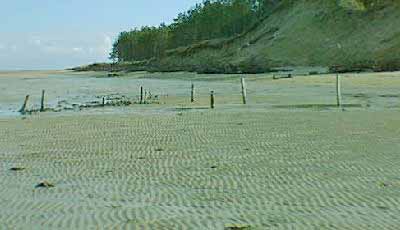 About 10 years ago, a series of stone barriers with gaps at intervals to allow the sand to be carried in behind, were constructed a few yards out from and parallel to the shoreline from the Plaids to just past the Alps green. Although these barriers are not very attractive to look at they have successfully halted erosion and the sand is noticeably becoming more golden in colour.

The stone gabions built to protect the Alps green 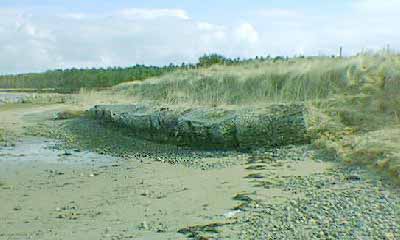 The latest defence against erosion 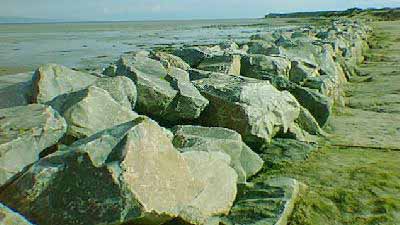