Raised beaches are the result of past variations in sea level resulting in a beach, formed during a higher sea level, now being some height above the current sea level. Tain’s raised beach occurs at about about 15 metres above sea level and provided a fairly level, but narrow site, above the level of possible flooding. Fortunately the land to the south west of this narrow terrace was relatively gently sloping and has enabled the expansion of the town in more recent times. The edge of the raised beach is marked by a steep slope or scarp, the former cliff line. The steeply sloping Castle Brae, leading to and from Tain railway station, runs directly down this scarp and the High Street and its continuation into Lamington and Ankerville Streets, runs along the top parallel to it. Just beyond Knockbreck primary school, this road descends diagonally across the scarp on its way down onto the Fendom and thence to Inver and Portmahomack. The scarp continues for about another 3/4 mile then takes a turn to the east before becoming very indistinct, eventually reappearing again north of Loch Eye. This scarp marks the edge of the Fendom area. 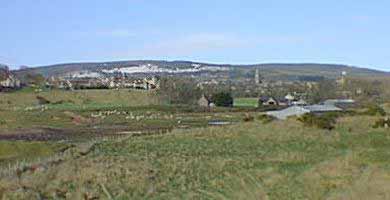 The raised terrace widens out for a while to the north west until it narrows again beyond the distillery and eventually disappears. It also widens out to the south east merging with the Plain of Ross. Where it is not covered by the buildings of Tain it provides good farmland.