Romancing the Stone (Extract from the Ross-shire Journal 2003)

Pictured at the Shandwick Stone are right, Roderick Mackenzie and Jean Mackenzie, trustees of the Shandwick Stone Trust, local councillor Richard Durham, Will Aitken, Seaboard Development Group’s Projects Co-ordinator along with representatives of ILM Highland. ILM Highland trainees undertook the work of constructing a new path from the roadway to the stone.

A project carried out in memory of a stalwart of the Seaboard was formally completed last week.

A beautiful granite sett pathway, leading to the ancient Shandwick Pictish Stone on the Seaboard Peninsula, was opened by members of the Shandwick Stone Trust last Wednesday.  The informal ceremony at the stunning, eight foot high stone, also marked the “passing out” of four young trainees from the from the Alness – based training agency ILM Highland which carried out the work on behalf of the Seaboard Initiative group. 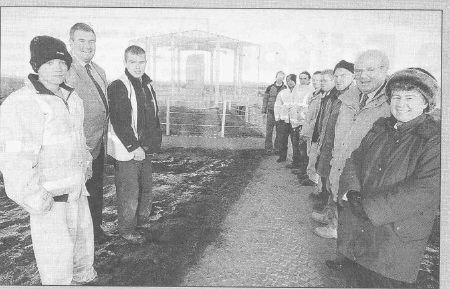 The project was initiated by the Seaboard Initiative group in memory of the late Ian Macpherson of Hilton who was a stalwart member of the Shandwick Stone Trust.

Ian, a former council housing officer who died suddenly in his mid 50s in September, had been a member of both the Shandwick Stone Trust and the Hilton trust and did sterling work for both organisations.

The four lads from ILM took great pride in crafting the new path up to the Class II Pictish symbol stone and also installed a new kissing gate, replacing a tumble down stile.

Richard Durham, the Highland Councillor for Seaboard, said, “The path greatly enhances the approach to the Shandwick Stone and makes the stone completely accessible by everyone, including wheelchair users.

“It marks the completion of another successful project by the Seaboard Initiative.”

Support for the project also came from the Community Economic Development Programme and Ross and Cromarty Enterprise.

The Shandwick Stone is one of three impressive Pictish cross slabs located in Easter Ross, the others being the Nigg Old Church, and the Hilton of Cadboll Stone, part of which is in the museum of Scotland in Edinburgh with another recently-discovered part remaining in the local community.  Legend has it that stones were erected in memory of three Nordic princes who perished in the Moray Firth.  The legend relates that a Nordic princess had been married off to one of the earls of Ross who badly mistreated the young woman. The Nordic King sent his three sons to wreak his revenge on the Earl of Ross for his mistreatment of his beloved daughter.  However a wild storm blew up in the Moray Firth as they approached and the boat carrying the king’s three sons was ship wrecked. According to legend, the three Pictish stones stood in witness to the places where the bodies of the Princes were washed up on the shore along the Seaboard.