Mrs Catherine Mackay or Munro bought a piece of land in Scotsburn from Sir Charles Henry Augustus Frederick Lockhart Ross of Balnagowan, a Baronet, for the sum of £300 in 1918. She converted Dalrannich which was just a croft house and byre into a house “like the gentry’s” cica 1922 after the death of her husband. She inherited about £250,000 from her brother who had made his fortune in corned mutton in Australia in 1921.

She lived in the house with her niece and they had a chauffeur/handyman called Davey Forbes. The niece married Davey who was much younger than her and the Aunt built the bungalow next door for them. On her death they lived in Dalrannich which was then called Scotsburn Villa. On the niece’s death Davey had life rent of the house and of the bungalow. The rent for the bungalow was set at £2 per week. 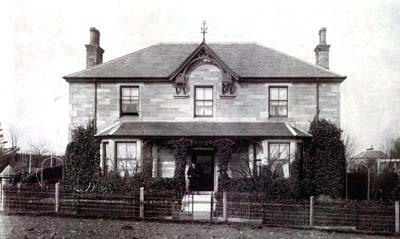 The house was empty for 7 years from 1967 until the Wilkersons bought it in 1974. They consulted Watson’s place names of Ross and Cromarty and called the house Dalrannich (the place of the bracken).

The house changed hands again in November 1997 to the present owners.

A picture of Catherine also known as Greeting Kate is proudly displayed in Dalrannich House today.

Cost of building in stone in 1922 was £800. Cost of building the stone wall round the perimeter of the croft was £1000. Under the wallpaper in the bathroom there are the names of the workmen who did the conversions on the house in 1922. These names were added to by the workmen carrying out work in 1997.

Lou Wilkerson furnished us with all this wonderful history when we bought the house in 1997.

The Morrison Family
Dalrannich House
May 2000