Diana Black was an orphan of the Natal in that she had been left ashore on the fateful day, along with her brother Eric who had a cold.

Miss Black died in Switzerland on 7 November 2016 having spent most of her life there as part of the family who had hired her to look after their children post-World War 2. They, the Johannot and Gradis families, continued to look after her in her later years and surrounded her with love to the end. She had celebrated her 102nd birthday five weeks prior to her death.

Diana was brought up by her grandparents and had an interesting and eventful life. As a schoolgirl she heard a talk by Dr Grenfell, the pioneer who brought medical care to the isolated coastal villages of Labrador, and was so impressed that, on leaving school, she went to Labrador and assisted the doctor. Prior to WW2 she acted as a volunteer on the Isle of Dogs where she helped during the extreme poverty of the days of the Depression, and, later, whilst in Vienna she assisted Jewish children to escape from Austria.

During World War 2 she worked with the security services and listened to radio broad-casts from Germany so that information could be passed on to the War Cabinet.

Post-war, a Swiss family responded to Diana’s advert seeking employment. They were in charge of a school for the children of wealthy families throughout Europe and needed someone to look after their seven-month son.

The family increased in number and Diana continued to look after them while their parents built the school into its prominence in Swiss education.

It was not until the age of 90, in 2004, that Diana visited the Cromarty Firth, following a visit to Glasgow to see her brother Eric, who was seriously ill there. Indeed, Eric had followed in the footsteps of his father, becoming a distinguished naval officer during World War 2.

During her visit Diana travelled to Cromarty and was surprised that so many people still knew the story of the Natal. She talked to local resident Jean Newall, then 97, who recalled the noise of the ship exploding and the sailors, who had been playing football in the town, running past her house on their way back to the pier, many in tears.

Diana also visited Invergordon to see the plaque in memory of the Natal at the lifeboat station, and she was so moved by the whole experience and by interest and kindness shown to her, that on more than one occasion since, she gave handsome donations to both the Cromarty and to Invergordon museums and to the Invergordon Lifeboat Station.

She also saw to it that the 90th anniversary of the sinking of HMS Natal was commemorated with a service at the site of the wreck. Her niece attended as did relatives of the Dods family who were killed on that day. 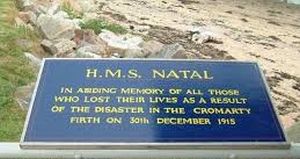