Information about Jock Skinner has been supplied by Regimental HQ of The King’s Own Scottish Borderers, as follows:

He served with the West of Scotland Artillery prior to joining 1st KOSB, serving in the Boer War where he was wounded three times. He transferred to the 2nd KOSB and served in the East Indies 1902-3, Burma 1903, and Aden 1906. He was with 2nd KOSB as part of the British Expeditionary Force in 1914, was wounded at this time and was awarded the DCM. When he had recovered from his wounds he transferred to 1st KOSB, fought in the Dardanelles 1915-16 and then returned to France.

On 18 August 1917, at Wijdendrift, Belgium, when his company was held up by machine-gun fire, although wounded in the head CSM Skinner gathered together six men and with great courage and determination worked round the left flank of some blockhouses from where the fire was coming and succeeded in single-handedly bombing and taking the first blockhouse. Leading his six men, he then proceeded to the other two blockhouses, clearing them and taking 60 prisoners, three machine-guns and two trench mortars. For his bravery he was awarded the Victoria Cross.

Jock Skinner was promoted to Acting CSM in June 1917, two months before winning his Victoria Cross at Langemark and wounded yet again. Leaving hospital, he was sent on leave when he married Miss Annie Lee in Glasgow and then received his decoration from King George V. He was also presented with the French Croix de Guerre.

Promotion to CSM came on 17 September 1917. On 17 March 1918 he was killed in action near Passchendaele while attempting to rescue a company medical orderley. The men of his company carried him back to Vlamertinghe, a distance of about 15 miles, and he was buried there on 19 March with pall bearers numbering six recipients of the Victoria Cross. 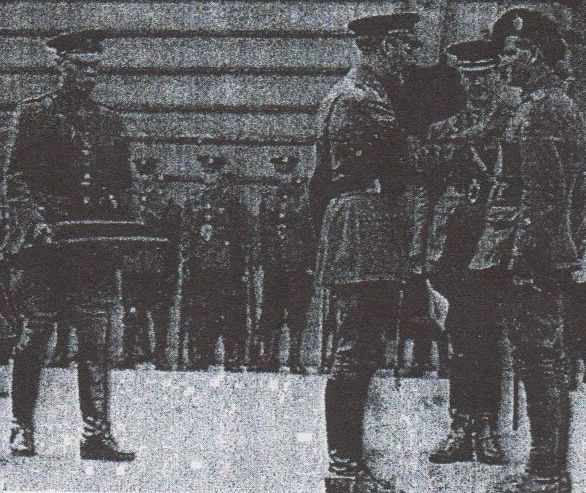 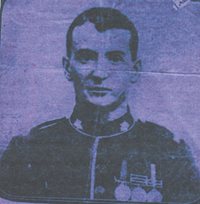 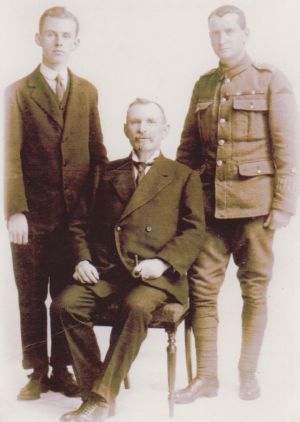 The night before he was killed

On 20 March 1917 a fellow soldier wrote: “I think you would like to hear about wonderful Jock Skinner, VC. The night before he was killed, I was in his Company dug-out and had a long chat with him about things in connection with my work and of which he had expert knowledge.

He was a typical Glasgow fellow with high set voice and strong Glasgow accent and when I spoke to him I just thought Can this ‘Jock’ be the man of outstanding bravery and extraordinary courage who was feted all over Scotland as one of its bravest sons? [The soldier then relates how they shared a cup of tea.]

A man of deep human sympathy, even when I was there they told me he had gone out in broad daylight, at extreme risk to himself, and buried three of our fellows (not KOSBs). He brought in their personal effects – photos, letters, identification discs – saying ‘Their folks’ll like to hear they got a decent burial’ and I’m sure their folks will be proud that Jock Skinner was the man to do it.

He was on an errand of this nature when he was sniped on the following day. A very brave stretcher party went out to get him and paid the penalty. The dirty sods might have recognised the action of a brave man and a stretcher bearer, as our fellows did two days before.

Well, Jock was brought back and the Division arranged his funeral. A staff Captain arrived saying the best team in the Division was turning out and the men were polishing and cleaning with great enthusiasm. Unfortunately I couldn’t go on account of a blistered heel, which is now all right, but I had the honour of saluting the gun carriage where Jock was lying under the Union Jack for which he had done so much. The usual din was going on all round, but what did it matter to Jock, for even when alive he paid not the slightest heed of them.

They took him to one of the official cemeteries where were assembled the other nine VCs of the Division – an exceptional gathering. Our CS Majors and Sergeants carried him to the grave, with our Battalion all wearing steel helmets standing round, surely the most fitting close, although deplorable, to such an outstanding career.

The CS Major in charge of the firing party was Jock’s friend. They have been through it together, both wounded eight times, and this same Sergeant Major Stevenson went out and brought Jock in notwithstanding the fact that the first stretcher bearer had been shot.

“The firing party having fired one volley, the pipes played a part of The Flowers of the Forest of which Jock was one of the fairest, then another volley was fired and again the pipes played The Flowers of the Forest. A third volley having been fired, the firing party presented arms, the whole Battalion stood to attention, the Officers at the salute and the bugles sounded The Last Post.

I hope at the end of the war I shall be able to visit the grave of this wonderful little man as will thousands of others who go to that cemetery.”

In the Ross-shire Journal of 18 August 2017 Lynne Bradshaw reported on the special ceremony during the week to mark the centenary of John Skinner’s bravery during the Battle of Passchendaele. Parts of her article are reproduced by kind permission. 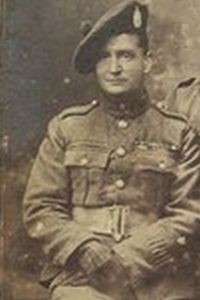 On 27 July 2016, during a tour of Flanders battlefields organised by Spa Coaches, Strathpeffer, John Ross, Inver, at Vlamertinghe cemetery, laid on behalf of the Royal British Legion (Scotland) a wreath in remembrance and honour of CSM Jock Skinner, VC, who by a strange coincidence had been born in the same house as John. 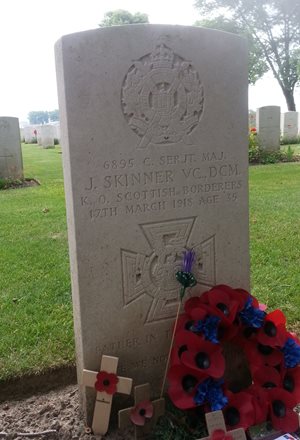 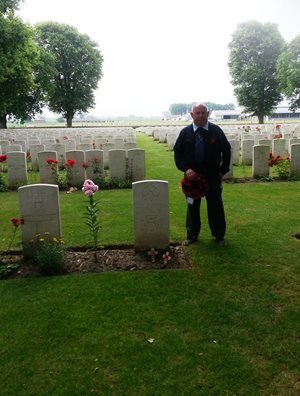 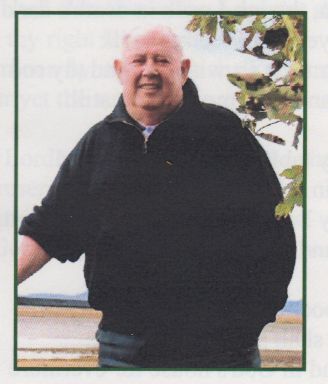 John Ross died on 25 April 2017 at the age of 80.
This photograph is reproduced by courtesy of his family and is included in memory of a lovely gentleman who was anxious that the bravery of a a native of Ross-shire should not be forgotten. Sadly, this new website went live only days after John’s death and so he did not see the results of his research.

In the Ross-shire Journal of 18 August 2017 Lynne Bradshaw reported on the special ceremony during the week to mark the centenary of John Skinner’s bravery during the Battle of Passchendaele. Parts of her article are reproduced by kind permission.

One hundred years to the day since he carried out his brave actions, Glasgow’s Lord Provost Eva Bolander unveiled a World War 1 centenary paving stone in CSM Skinner’s memory at the city’s People’s Palace. 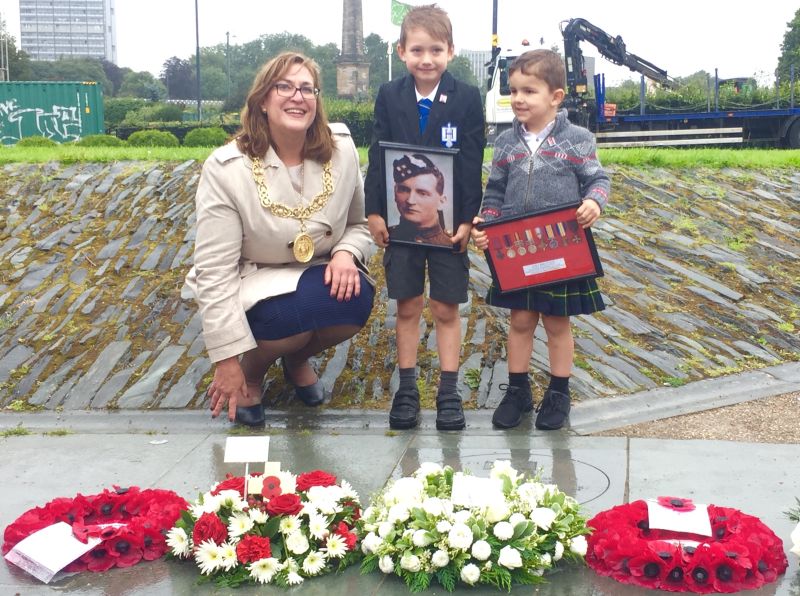 Many members of the association of his regiment, The King’s Own Scottish Borderers, 25 of his relatives from around the world and representatives from his old school and neighbourhood attended the poignant event. 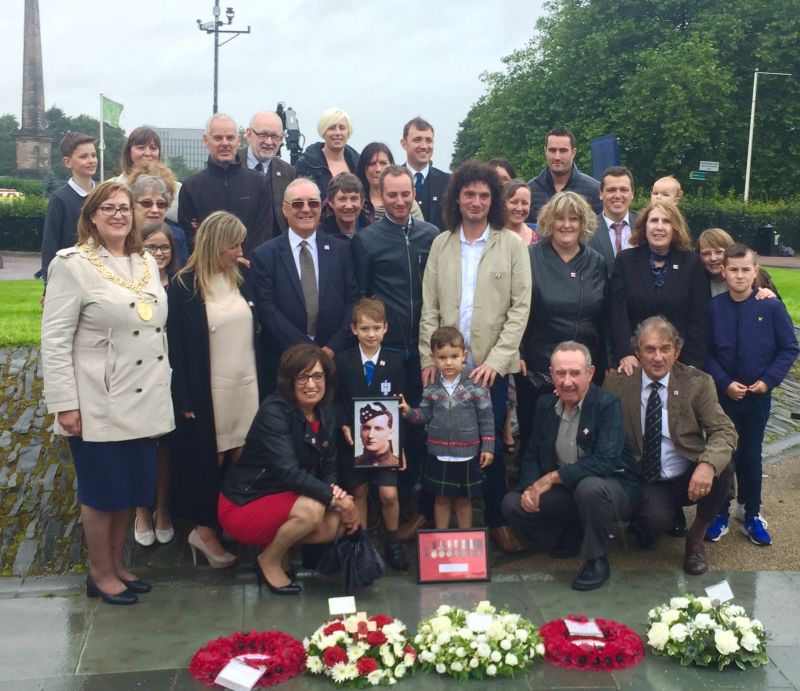 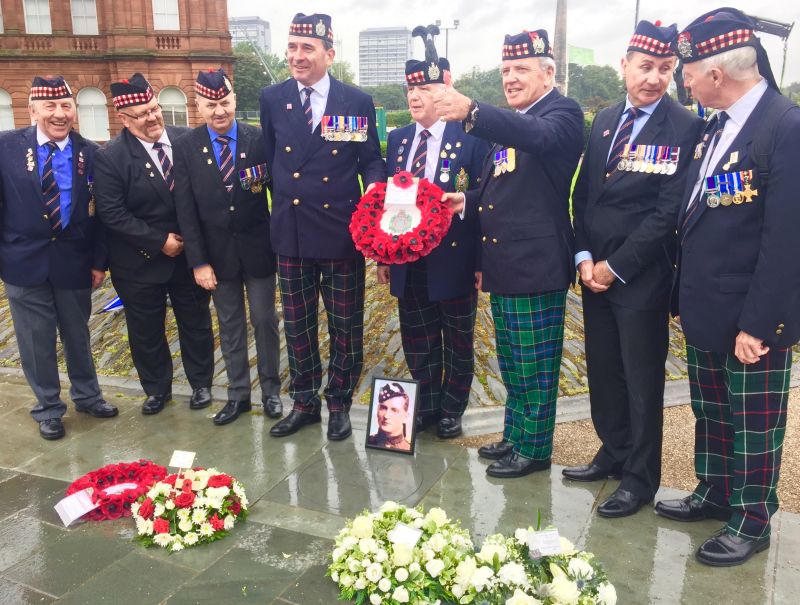 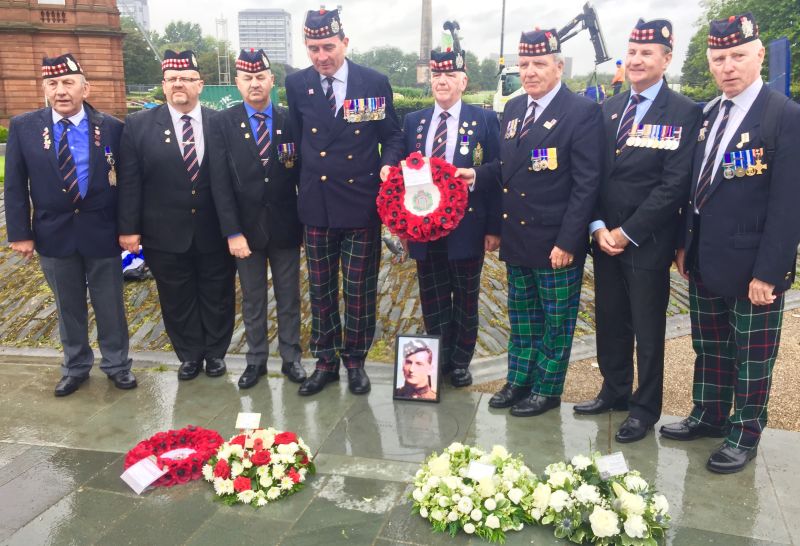 John’s great-nephew Stewart Skinner, who travelled from Australia to attend the service, is keen for the Easter Ross side of the family to know about John’s honour so they can share in his pride.

“John was thought to have been born in Inver in Easter Ross, where his father Walter, a tailor, was from, but was brought up in Pollockshields in Glasgow.

“Stewart explained they had lost contact with their Ross-shire family, but John’s strong connections to the area had not been forgotten. ‘We wanted to spread the news of his honour to that side of the family,’ he said. ‘It is a shame they weren’t there and didn’t know about it; when my cousin and I went up there many years ago to visit them, they were very proud of him. The more I read about him, the more I realise he was a boy’s own hero, forever in trouble. He ran away from school and joined the army at 16. This is a great story for Inver, and we want them to know that he was honoured again 100 years on for what he did to win the Victoria Cross.’

“During the ceremony Stewart gave a vote of thanks, his cousin Myra Grant read the Victoria Cross citation and his cousin Alan Skinner delivered a poem. The Skinner familhy also commissioned a pipe tune in his name which was played at the event, and a painting of the battlefield by one of the relatives was presented to the regimental association. ‘The event went very well; it was well worth the trip,’ said Stewart.”

In November 2018 the residents of Inver gathered to unveil a Memorial in memory of John K Skinner, VC. Councillor Mrs Fiona Robertson presided, the Act of Remembrance was led by the Rev John Macleod, and the Memorial was unveiled by Lord Lieutenant Mrs Janet Bowen, CVO.

NB: A photo of the memorial will appear as soon as RCHS can obtain one. 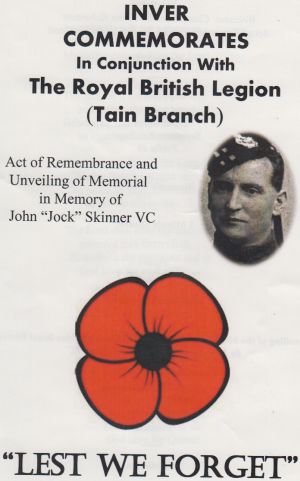