Attribution:Reproduced from the obituary in the Ross-shire Journal 1st November 1973

A host of friends throughout Ross-shire were greatly shocked to learn of the sudden demise of Miss Margaret Logan, Newtonville, Muir of Ord former beekeeping expert of the North of Scotland College of Agriculture, which occurred while on holiday in the Argentina, visiting her sister, Mrs. Kristiansen, on 18th October 1973. Miss Logan was actually attending an Apiculture Congress near Buenos Aires when she suffered a heart attack and died in hospital in the Province of Buenos Aires the following day.

Throughout her years with the North of Scotland College of Agriculture, Miss Logan did admirable work in developing a valuable rural industry in all the Highland Counties. Her missionary zeal and enterprise in fostering practical interest in bees and honey bore ever increasing fruit. Wherever hives were to be seen, from Inverness to the far North, it was a surety that Miss Logan knew about them and that her advice had been asked, season after season, with beneficial results.

Hailing from Ardross, Margaret Logan was educated at Tain Royal Academy, and with a pronounced agricultural background, she studied at Craibstone School, Aberdeen, where under the guidance of Dr. John Anderson, she took the expert bee-masters’ certificate. Her results in beecraft were so remarkable that Dr. Anderson determined to have her on the College staff and in 1938 she became assistant lecturer with headquarters in Craibstone.

Whenever possible, she recommended the formation of associations which could do much to keep interest alive, nor was she forgetful of the development of beekeeping and honey production in the widely-scattered crofting areas of the Western Highlands. The ideal demonstrator, she examined from six hundred to seven hundred colonies of bees every year.

In her retirement she continued to give of her vast experience to several groups of her beekeeping friends. 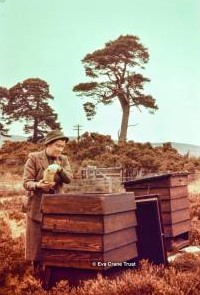