A single-span stone bridge built during 1811-1816 by roads engineer Thomas Telford crosses the River Averon at the entrance to Alness. The town is actually a composite of two parishes, Alness and Rosskeen, divided by the River Averon. The original Alness was but a small crofting community opposite the old Kirk and saw its main expansion in the nineteenth century thanks to Captain Hugh Munro of Teaninich, who also founded Teaninich Distillery in 1817.

Alness has, over the centuries, been witness to change and development like no other community in Ross-shire, especially since the first recorded mention as ‘Alenes’ in 1227.

Trading links with the south improved dramatically after the 1707 union and the evidence lies around the Cromarty Firth in the form of Girnels. One such stands at Alness Point. A short distance from the Girnel is the mansion of Teaninich House, built by Captain Hugh Munro in 1784. Munro was responsible for alterations to the course of the River Averon in 1844 and Teaninich remained a Munro seat until the First World War when Charles Harrison, the American on whom the book Little Lord Fauntleroy was said to be based, bought it. 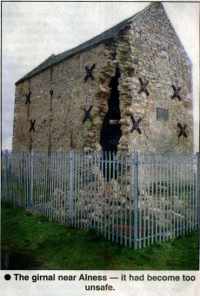 Alness has many links with armed services. These began as early as 1715. Sentry Hill, above the present footbridge was a watchpoint. The Earl of Sutherland had gathered around 1200 men on the Government side during the first Jacobite rising. On 5th October he made his HQ the Crawl Park, occupying a line along the lower reaches of the Averon.. Further reinforcements arrived by sea, which helped to reinforce with the military that the Cromarty Firth could be a great asset in time of conflict. Among those highlighting its potential were Daniel Defoe and, much later, Winston Churchill.

During WW1 the Americans took over Dalmore Distillery and used it as a mine base. The so-called ‘Yankee Pier’ still juts out into the firth. The 1920s saw the RAF’s presence grow. Permanent squadrons of seaplanes started to arrive in Alness around October 1938 when it became a training base for Short Sunderlands. In June 1941, 4 (c) OTU (Operational Training Unit) was moved from Stranraer to Alness and its officers’ mess based at Dalmore House. The OTU operated a number of aircraft – mostly Sunderlands and Lerwicks. Short Sunderlands had a crew of thirteen and by 1942 the OTU was producing 22 trained crews a month.

It was from Alness that the Duke of Kent, the King’s youngest brother, took off on his ill-fated flight in August 1942. He was due to visit troops in Iceland. The expected route was to follow the coastline of Sutherland and Caithness, but for some, still unknown, reason the aircraft turned inland and, in heavy mist and rain, crashed on Eagle Rock above the village of Berriedale. All crew were killed except rear gunner Flt/Sgt Andrew Jack.

The war memorial at the head of the High Street was unveiled in September 1921 by Alness-born Robert Munro. Munro was born in Alness, a son of the Free Church, in 1868. He rose from a Lawyer to King’s Council, then elected an Liberal MP in Lloyd George and Asquith’s government, His political star rose on becoming Secretary for Scotland and finally enobled as Lord Alness in 1934.

The Alness we see today was thanks in part to Harold Wilson’s government of 1964. His famous phrase ‘the white heat of technological revolution’ could have been written with Easter Ross very much in mind. At the Labour Party conference in 1967 Wilson announced the building of two aluminium smelters. In November of that year planning permission for 500 council houses at Alness was passed.

Some 2000 construction workers arrived and Easter Ross was once again providing full employment. Indeed, between 1970-73 the locally born had dropped by 7% to 60%. Alness residents born in the central belt rose 157% and other incomers by 138%.

On Hogmanay 1981, the Invergordon Smelter closed. The night shift workers slept through the day their jobs disappeared.

Some 900 workers and Alness were brought to their knees. Overnight the unemployment rose 20%. It was at moments like these that organisations like the Citizens’ Advice Bureau, Community Education and the people of Alness came into their own. Somehow we got those families through a lot of dark times.

Fast-forward nine years: a change is evident. Easter Ross is slowly growing in prosperity. Jobs are returning. It was a good time to take stock. Proposals for a Community Play, ‘The Cruikit Rainbow’ came to fruition. It was a determined effort to draw a line under the fortunes and misfortunes of the recent past and move forward together. The play brought together over 300 participants, actors, gymnasts, musicians etc; people from all housing estates and areas of Alness to tell the story of Alness.

The players put on three consecutive performances in March 1990. The emotion from performers and audience on the final night will never be forgotten by anyone present.

The crucial factor in the story of Alness is a community spirit arguably unmatched anywhere else in the country.