The photograph of the church, a postcard datestamped 1906, is particularly interesting in that it shows the (now non-existent) belfry. The text above the photograph is taken from Hugh Miller’s Scenes and Legends and reads as follows:

Not long ago I wrought for about a week in the burying-ground of Kirk-Michael, a ruinous chapel distant six miles from the town of Cromarty. The western gable of the ruin is still entire ,though the very foundations of part of the walls can no longer be traced on the sward, and it is topped by a belfry of hewn stone, in which the dead bell is still suspended. I wrought directly under it, and frequently paused in my labours to harken the blast moaning amid its spires, and whistling through the apertures. The sea flows to within a few yards of the lower wall; but the beach is so level and so little exposed to the winds that even in the time of tempest there is heard within its precincts only a faint murmur, scarcely loud enough to awaken the echoes of the ruin. Ocean seems to muffle its waves approaching this field of the dead. During the course of the week which I spent in the burying-ground, I became acquainted with several interesting traditions connected with its mute inhabitants …… 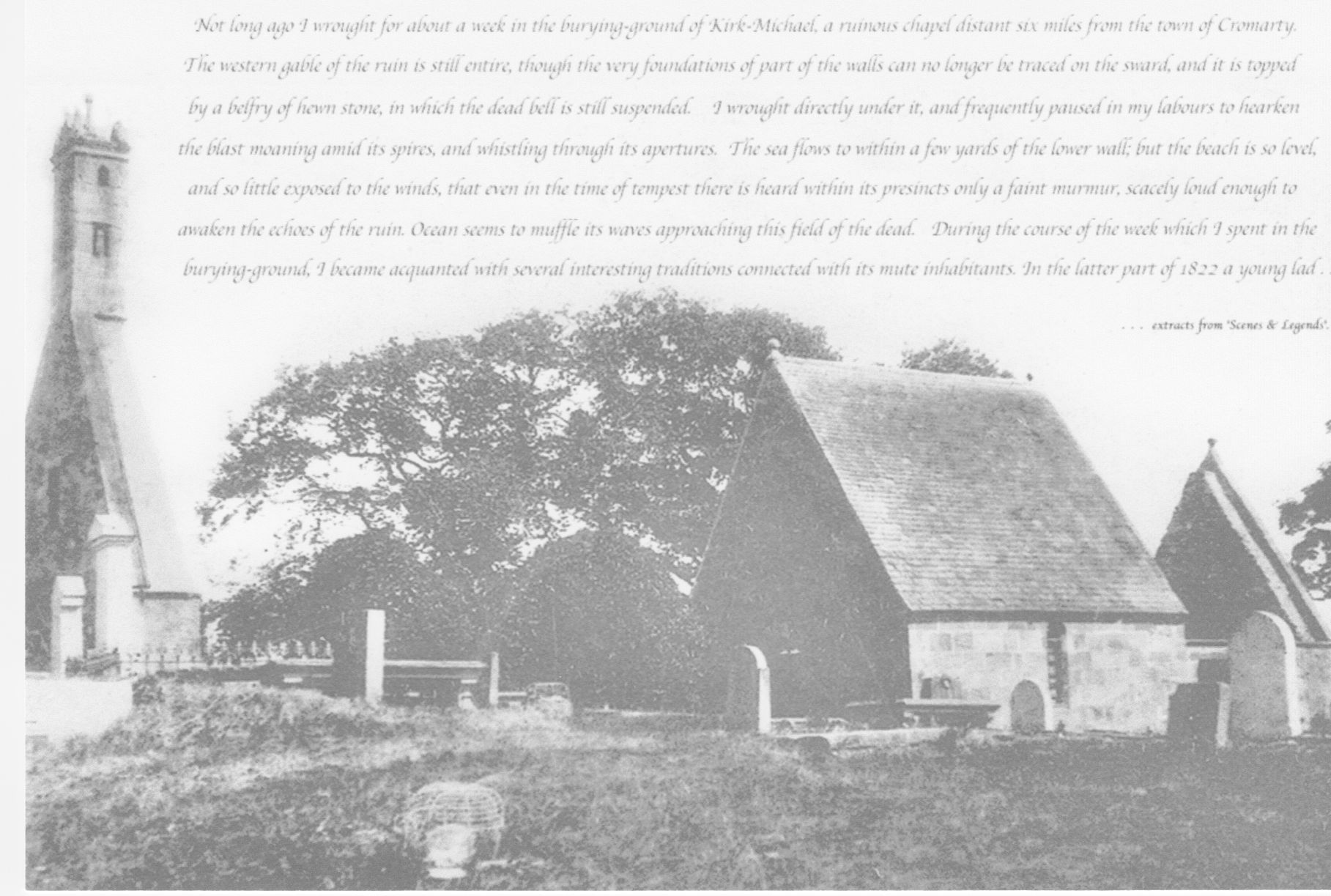 On 25 April 2017 the culmination of some 17 years’ effort was reached when the restored Kirkmichael was officially opened by HRH The Duke of Gloucester.

The church dates back to the 1400s and after the Reformation the nave was adapted for use as a Protestant church, while the chancel became the Braelangwell Mausoleum. However, for a considerable number of years the building had been in a dangerous state.

Between 2000 and 2002 members of Resolis Community Council formed the Kirkmichael Trust with the aim of restoring the building and embarked on a programme of fund-raising. The rapidly deteriorating building became even more dangerous in 2012 when the fragile roof collapsed.

By this stage fund-raising had begun, mainly through donations from local people, but the project received a massive boost through financial support from Heritage Lottery, Historic Scotland, Highland Council, Highlands and Islands Enterprise and the Robertson Trust. With the target of £750,000 achieved, restoration could commence. 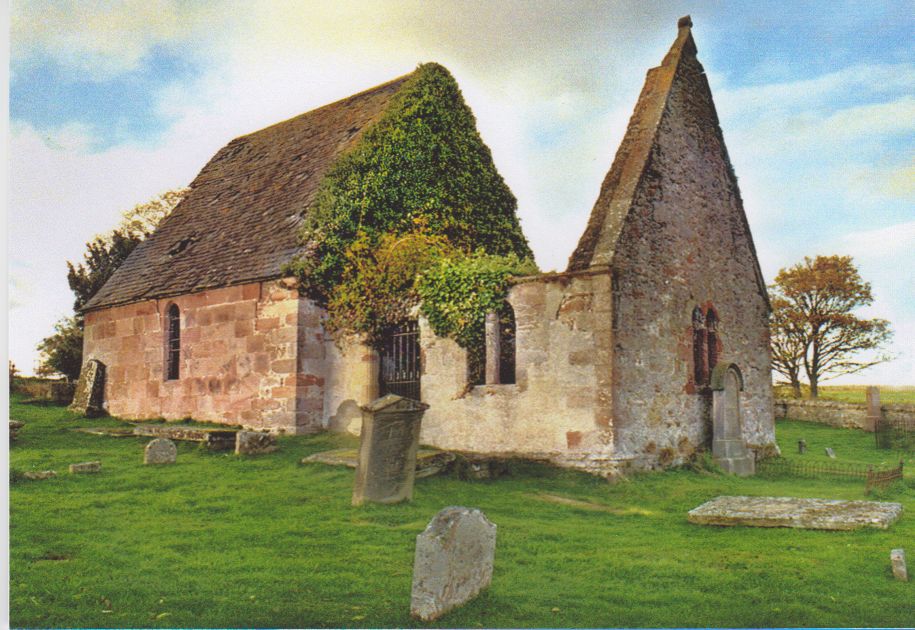 On 22 June 2017 members of Dingwall History Society were given a tour of the restored Kirkmichael by Dr Jim Mackay. Some of the photos in the album at the bottom of the page were taken by RCHS on the day. 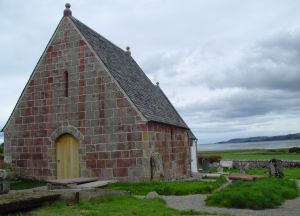 In June 2019 it was announced that Kirkmichael had won its class in the UK-wide 2019 Planning Awards.

The judges said the project was “particularly impressive for its community engagement and enthusiasm” and because of “the uncovering of artistic as well as heritage assets”.

The story of Kirkmichael continues and, perhaps most moving, is the one recounted in the Ross-shire Journal of 20 September 2019, reproduced here by courtesy of the Editor.

A memorial stone in a Black Isle cemetery, smashed in a careless accident more than 200 years after it was erected by a dairymaid who scrimped and saved to honour her parents, is being replaced after a remarkable labour of love.

The first new tablestone carved in a century will be laid in place in Kirkmichael after a painstaking exercise by conservationists and volunteers touched by the story unearthed by a local historian.

The original was smashed decades ago when a large granite urn was dropped onto the fragile sandstone slab.

Mary McDonald, a domestic servant and dairymaid, was a pauper when she herself died at the age of 78 at Balmuchie, Fearn, in February 1865.

Years before, she somehow managed to scrape together enough for a memorial to her parents, Donald, a farm labourer who died aged just 33 when she was still a toddler, and her mother, Margaret Stewart, who died in 1815 at the age of 57.

It was laid at Kirkmicha\el and stood for two centuries before it was cracked and broken in the 1980s by the weight of a granite urn that topped a memorial to Lieutenant General Sir Hugh Fraser of Braelangwell and his wife, Dame Isabella.

The urn had become displaced and was carelessly placed on top of the tablestone, possibly by a grass-cutter.

The Kirkmichael Trust, behind a determined and hugely successful restoration of the kirkyard, appealed for support to have a new stone identically carved, added in its own funding.

Dr Jim Mackay, chairman of the Kirkmichael Trust, said: When we fixed the buildings at Kirkmichael we began to address the derelict condition of the kirkyard itself. This was one of the saddest stones in the place but we think poor Mary would be pleased to see it back the way it was. 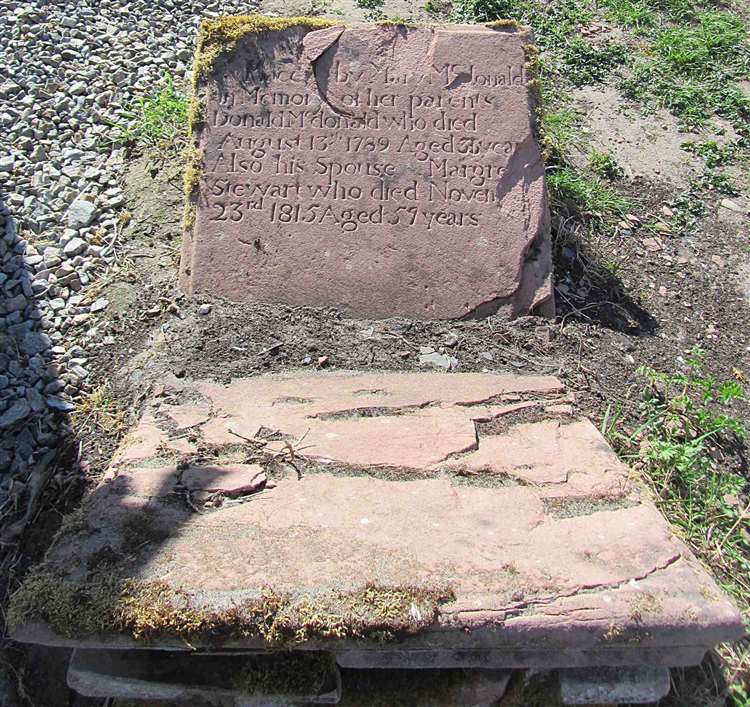 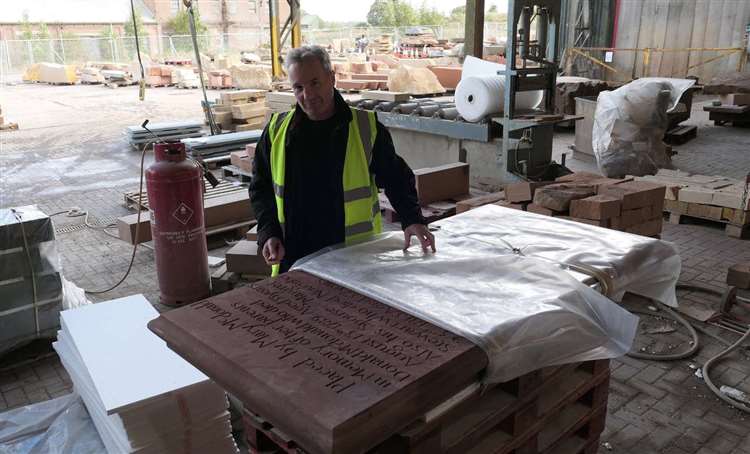 Attribution: Both photos courtesy of The Ross-shire Journal.

View more photos of Kirkmichael and its restoration.