There were in fact two mills at Charleston, though only the Mill House survives. This picture shows them as seen from the back of the Mill House and was painted by Samuel Fisher who was the last miller.

The mill was built in the 13th century. When it was built a miller was made to serve a number of years and each farm was to supply grain; the rent was an amount of meal. If a miller ran away he was brought back to serve the time allotted. The history of the Black Isle is found in the Black Isle Chronicles.

The estate sold the croft belonging to the mill for housing in the early 1960s. Sam gained the tenancy of another croft at Drumsmittal in 1962. Without transport he could not manage to work both the new croft and the mill, so gave up the mill. Shortly afterwards the mills were demolished.

The upper mill had the grinding stones and a drying house (or ‘kiln’ as Sam would say) at the rear where the grain was dried before milling. The undershot water wheel was fed from a dam at the top of the hill and drove the machinery. The dam never held enough water for a long spell of milling so an engine was used to provide the power for long spells of work. The small engine shed, belt and drive pulley can be seen. In this mill the ‘Black Isle oatmeal’ was produced.

The lower mill was water-driven with a fence round the wheel pit and had a set of rollers for bruising grain for animal feed. 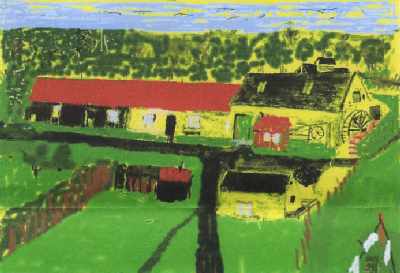 Attribution: Charleston Mills, by North Kessock. [Painting by Samuel Fisher, who was the last miller.]

The Mill Dam was situated in the fields above the mills and can be seen on the old Ordnance Survey map. It looks as if two burns ran into it. The water channel to the mill wheel was closed off by a rising gate worked by a handle on a screw. This was to let a sufficient quantity of water gather in the dam. Before milling could start, the miller had to walk up to the water gate and open it part way. Then, if the flow of water was not enough, he had to run up again and open it a bit more. The painting by Sam clearly shows this well-worn track.

The dam was filled in for housing, and at least one house has been affected by subsidence. 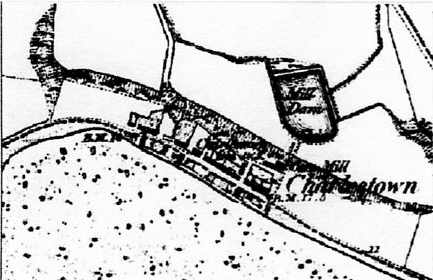 The mill was built in the 13th century.

The Mill.
Starting and stopping the water wheel. The flow of water to the mill wheel was controlled by a flap in the side of the wooden trough leading to the top of the wheel. By means of a rod going through the mill wall this flap could be raised to channel the water to the wheel or lowered to let the water drop into the wheel pit to run away to waste, depending on whether the wheel was to work or not.

The machinery.
The main mercenary-wheel for driving all this had wooden cogs of oak.

The grinding mechanism.
There were two pairs of millstones. The first pair was used to remove the husks from the grain, called shelling. They were set a little wider apart than the second set. The oats, after being shelled, were passed over a sifter to extract the dust which was used to feed pigs. As the rest fell from the sift a blower blew the husks into the sid house (the husk house) in the angle between the kiln and the mill. Surplus husks were sent away to be made into animal feeding.

The shelled grain or kernels fell down a chute and were collected by small pails on an endless chain and raised up to the top floor. As the pails went over the top wheel they tipped out the kernels which fell down another chute into a hopper where they were ready to be fed down into the second set of mill stones. The second set of stones did the milling of the grain and were set a wee bit closer than the first set. After the second set of stones the meal passed over a riddle where the meal and the bran were spearated before the meal was bagged.

The engine was a Blackstone diesel housed in a lean-to shed, as seen in the picture. The flat belt drive would slip if the belt got wet and so an iron roof was put over it. 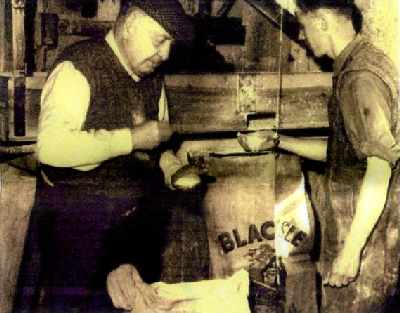 Inside the Upper Mill
Simon McBean (left) and Sam Fisher sample the meal. The millers were looking at the quality of the meal, colour, roughness and also taste.

This was a smaller building and was on two levels. The wheel was set into the ground but was still an overshot one. The grain was carried in bags into the upper level, then into a hopper (a cone shaped box) which opened into a wooden chute to the bruiser, which rolled the grain into what we called ‘bruise’ which was fed to the animals. The bruise was carried upstairs in bags, awaiting collection.

As Sam says, there was a lot of hard work involved in being a miller. And there was always a lot of dust about. Strangers used to find it acted like itching powder and went away scratching.

Maintenance
Twice a year the pairs of stones had to be separated and the surfaces dressed by five cuts of a hand pick to an inch. The stones were five feet in diameter so the time factor to do this you can imagine. The outer six inches of the stones did the grinding and pushed the grain into channels cut out in it and was thrown out. Then the stones had to be set plumb so they ground properly. The shafts that drove the stones were lubricated at the centre with lard and rough salt.

It was all hard graft in those days; you were a miller and a millwright.

Note the name ‘BLACK ISLE OATMEAL’ and the picture printed on the sack, which is held up in position under the delivery spout by a hook and string.