In October 2015 a group of more than 50 people attended a ceremony at Carn Glas, a Neolithic chambered burial cairn at the Heights of Kilcoy. The cairn is regarded as one of the finest monuments in the area, dating back to c. 3600 BC.

The first excavation was in 1906 by Lord Abercromby and discoveries then were a flint arrowhead and pottery. In 1955-56, amateur archaeologist Dr Tony Woodham excavated the site and found a fine leaf-shaped quern, used for grinding grain and now in the possession of the National Museum of Scotland, in Edinburgh.

The 60th anniversary of the second excavation was marked by the cutting of a tape at the cairn by Dr Woodham’s son Colin as part of the 2015 Highland Archaeological Festival.

After 1956, Carn Glas became neglected and eventually became so covered in gorse and vegetation that the chamber could not be reached.

Funding from Archaeology Scotland allowed members of Archaeology for Communities in the Highlands, the North of Scotland Archaeological Society and North Kessock and District Local History Society to embark on a programme of clearing the site. 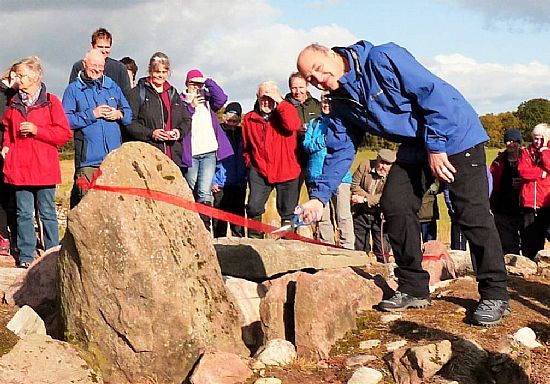 “The restoration of Carn Glas, a Neolithic chambered burial cairn at the Heights of Kilcoy and one of the oldest known structures on the Black Isle, was recently celebrated as part of the 2015 Highland Archaeological Festival. Over 50 people ventured to the site, high on the Millbuie ridge, to attend a ceremony marking the completion of a community project between three local heritage organisations – Archaeology for Communities in the Highlands (ARCH), the North of Scotland Archaeological Society (NoSAS) and the North Kessock & District Local History Society (NKandDLHS).

“The cairn has long been regarded as one of the finest archaeological monuments in the Moray Firth area. It was first excavated by Lord Abercromby in 1906 who discovered a flint barbed and tanged arrowhead and sherds of beaker pottery, and was last excavated in 1955-56 by amateur archaeologist Dr Anthony Woodham who found a fine leaf-shaped arrowhead and a superb saddle quern, now in the possession of the National Museum of Scotland (NMS) in Edinburgh.

“After 1956 Carn Glas was neglected and by the new millennium it had become so extensively covered in gorse and accreted vegetation that the chamber was almost impossible to reach. Two years ago, the invading overgrowth prompted members of ARCH, NoSAS and NKandDLHS to take action to halt further deterioration and dilapidation of the structure. Funds were obtained from Archaeology Scotland’s Adopt-a-Monument scheme for the joint community project that has now re-instated the burial chamber as an outstanding Neolithic monument and as a visitor attraction.

“The new information board erected on the site features text written by Dr Alison Sheridon, Senior Neolithic Curator at the NMS, and a commissioned sketch by Eric Allan, President of Inverness Art Society, of how the cairn might have looked after it was built about 3600 BC. The ceremony of cutting the tape was carried out by Colin Woodham of Muir of Ord, son of the 1950’s excavator, who returned to the cairn 60 years after he last saw it in the company of his father.”