The Emigration Stone - on the Links at Cromarty

The big artwork which transported us from the time of Highland Clearances pain into a future of renewed intercontinental links was the Emigration Stone on The Links, carved mostly on site by the celebrated architect and stonecutter Richard Kindersley on a commission from Cromarty Arts Trust.

The stone is a massive tribute in Caithness flag from Spittal quarry, over four metres high and more than a tonne weight, to the thousands of emigrants who departed Cromarty for the New World on scores of ships during the 1830s. Many of the ships are named on the margins, and in the middle is an eloquent passage by Miller describing the leaving of one, the Cleopatra.

The unveiling of the stone took place on Miller’s actual birthday (October 10) and that was only one of the rich, multilayered significances of the event. A new standing stone had been erected, raising echoes of the Pictish forbears. Dr Margaret Mackay, director of The Scottish School of Studies archive, who performed the ceremony, `felt tremendous pride. affection and humility’ for what her ancestors, who sailed on the Cleopatra, went through. It was a monument also to Miller the itinerant stonemason, the eyewitness reporter and the geologist.
(Extract from Ross-shire Journal, January 2003) 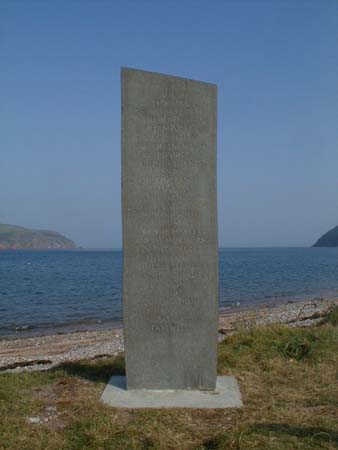 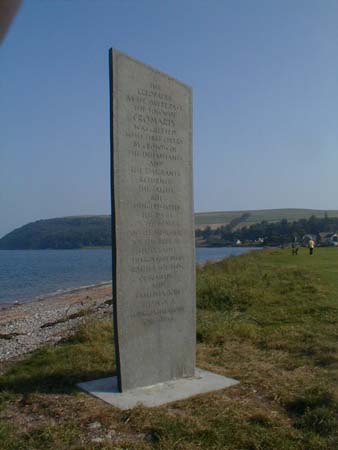