*Hugh Miller (Scenes and Legends,” p. 49) mentions an ancient custom seal or cocket, supposed to belong to the reign of Robert II, and then in the Inverness Museum, bearing the legend ‘Crombite’. From an inspection of the old forms two things are clear; first, that the modern English form, Cromarty is not radical, but was developed at an early stage through sympathy with the ‘r’ of the first syllable; of Eng. bride-groom, from A.S. brid-guma, literally ‘bride-man’. Further these forms, as well as other considerations, negative the derivation Crom-bagh bent bay. The base is doubtless crom bent; the question is whether we are to regard the b of Cromba’ as radical or as developed. Developed b after m is seen in lombar, from lom; Ir. crompan a sea inlet from crom; and in the common Crombie applied to bent streams and to places at a bend, e.g., Combie in Fife; also Dalcrombie, G. Dul-chrombaidh, a place on a bend of L. Ruthven, Inverness.

On this theory we have (1) crom as base (2) developed b. (3) terminations-ach, place of, and;dan or-tan, diminutive all meaning. Little place of the bend; of Loch Saileach in Ireland, called by the Four Masters Loch Sailcheadain,* also Ardochdain, Lochcarron. *Joyce, Irish Names of Places II., 36.

On the other theory it would be possible to suggest crom-bath with extension, bath being an O. Ir word glossed saile and muir, sea.
Cromarty Firth; G. Gaolas Chromba’.

Farness; Farnes 1576, Estir Farnes and Litill Farness 1576 ; G. Fearnais place of elders ; from ‘fearn’ with termination ‘-ais’ for which see Kinnettes in Fodderty. For the meaning of. Allerton. Cf. Glenferness, near Forres.

The Souters; “Craiges callit the Sowteris” appears in an Act of Par. 1593 ; G. na Sudraichean Various theories have been offered in explanation of the name the favourite being ‘sutor,’ a shoe maker. The Gaelic form favours a derivation from sudaire, a tanner, which gives rise to many names in Ireland. Na Sudraichean would thus mean the place of tanners or the tanneries. “The Souter” is a hill in Strathglass, G. an t-utar, Mullach an utair and there is Souter Head between Aberdeen and Cove.

Banans; The Gaelic is not forthcoming but it is probably an English plural of ‘beanan’, a hillock.

Ardevall; Height of the township.

“Castlehill of Cromarty, called the Mothill of the same”, 1599.

Glen-Urquhart is supposed to have been so named by or from the Urquharts of Cromarty ; but of the parish of Urquhart.

Rosefarm, originally Greenhill ; so called after Mr Rose of Tarlogie.

Easter Ardmeanach, on the summit of the ridge, remains of the old official name of the Black Isle; Mid-height.

Chaplainiry of St Regule 1561 is located by Hugh Miller, as also the Chapel of St Bennet and St Duthus Well. He also mentions a curious spring called Sludach. 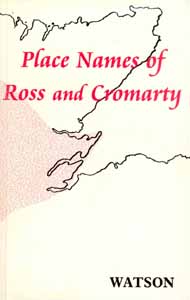